Cats in a Crate!

Hello Stampin' friends!  Do you like cats?  If so, I have a really cute card to share with you today!!  I made this last week for a fellow cat lover friend using the stamp set, Pretty Kitty.  You can find this stamp in Stampin' Up's annual catalog on page 49.  My daughter is actually the big cat lover in our family.  If I were to choose, I would probably pick a small dog over a cat.  But I love my cat, Sammie, who I inherited from my mom.  She is definitely a one person cat though - me!  When my daughter was a child, there was a house at the end of our alley (in Texas, most houses have the garage at the back of the house and an alley for coming and going) that every few months would have the "free kitten" sign in the yard.  She and I tried to adopt one of those cats several times - even once, bringing the kitten home with us - but Sonny would not have any part of a cat so we walked back and returned the kitten.  Finally when she was in middle school and I was working at the public library, someone brought in a mother cat and her litter that had been abandoned.  It was close to Christmas and the public buildings would be shut down.  They were going to put the kittens and the mama cat to sleep if no one would take them.  I called Sonny and got the "ok" and brought a kitten home to Ashley for her birthday.  She named him Mr. Claus.  She loved that cat - not me so much.  We had him for several years.  Eventually, of course, I ended up taking care of him when she went to college until he got sick and we had to put him to sleep.  No more cats in our life until about 8 years later when someone abandoned a kitten in the parking lot of the hospital in Washington where she was doing her residency.  Since it was a military hospital, we figured someone got transferred and left the kitten behind.  Ashley named him Taco.  He was a great cat!!  Much more lovable than Mr. Claus!!   He made the cross country trip from Washington to D.C. laying on a pillow on the console between us happy as a lark.  Unfortunately, he got sick after 2-3 years and died unexpectedly when he was being sedated to give him fluids.  That was the worst!  She went several years before she'd even think of getting another cat but finally, she and I made a trip to the pound and found Bogart.  He is the BEST cat ever!!  Everyone loves him - even Sonny!!

So - now that you have read all that, I guess you would like to see the card! 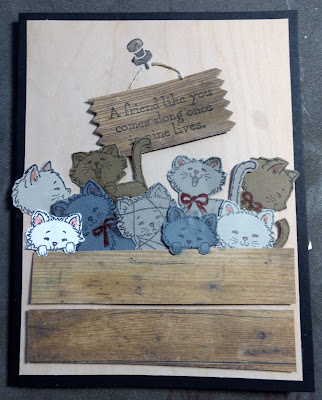 This card took a little longer to make than the average card.  I stamped the kittens on neutral card stock (Basic Gray, Sahara Sand, Crumb Cake, Soft Suede, Smoky Grey) and cut them out with my paper snips.  The "crate" is from the Wood Textures DSP.  I used dimensionals on the "crate" and just fit my cats in using Glue Dots.  I used markers to color their bows and put a little pink on the ears.  The push pin holding the sign is from Painters Palette.  I used the Mini Treat Bag Thinlets for the zig zag ends of the sign.

Here's a funny picture for you.  I was doing some spring cleaning Saturday and when Sonny moved the chest in our room so he could vacuum behind it, we found the hiding place for all Sammie's toys: 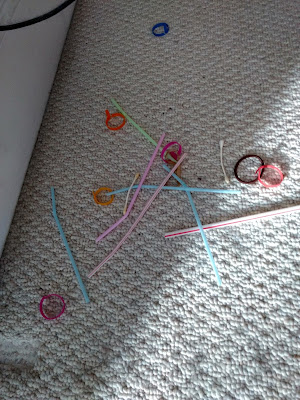 I think spring will be here soon - at least I am hoping!  These are some pictures I took in the last couple of weeks.

I love this kitten stamp set.  It's been a long time since Stampin' Up has had a really cute dog and cat stamp set.  And this year, they have both in the catalog!  I love the images on both but decided to just get the cat set .... at least for now!!   It is called Pretty Kitty and you can find it on page 101 in the Annual Catalog just below the dog set, Bella & Friends.

This is a card we made in Stamp Club using 3 of the 5 kitty images from the set.  I let each person pick which image they wanted to use.  I used the Circle Framelits to die cut the circles on the Watermelon Wonder card stock and Shimmery White for the stamped images because I wanted to watercolor.  The Misti came in handy for this card.  You can position all 3 images and stamp at the same time.  The card base and the little hearts (from the Mini Treat Bag die) are Smoky Slate.  I used Smoky Slate and my Aqua Brush to watercolor the kittens and Cajun Craze for the flower pot.  The rest of the coloring was done with markers.  The top Watermelon layer is raised with dimensionals.  This is where the new Dimensional Strips come in handy! 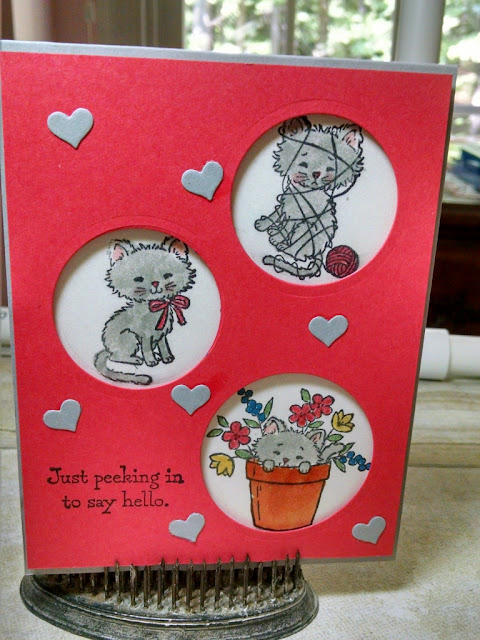 This Wisteria Wonder card is basically the same as the one above except when I made it, I had not gotten the Circles thinlits so used made rectangle openings for the kittens.   I used the Swirly Bird stamp set for the circles and the little bows are from the Mini Treat Bag die. 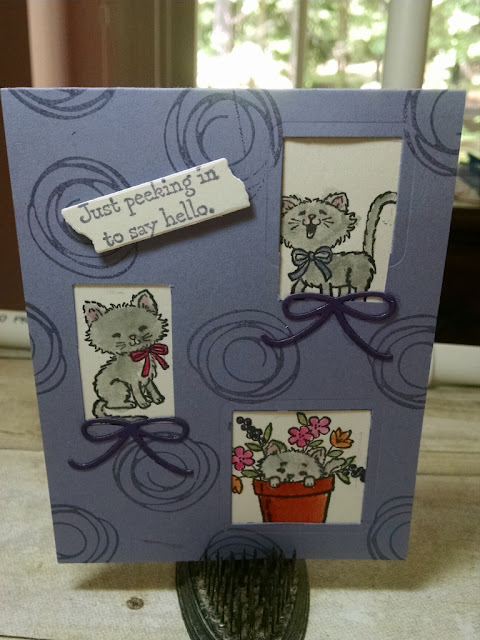 I got a Stampin' Up order last week and just had to play with the Pretty Kitty stamp set!  I had actually talked myself out of ordering this set but guess I didn't do such a good job listening to myself!  It's so cute though!!  What do you think? 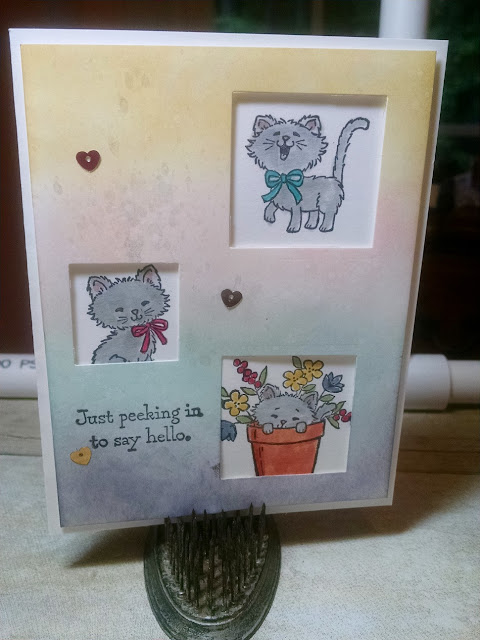 I sponged the white thick card stock with Wisteria Wonder, Pink Pirouette, Soft Sky and So Saffron and then used the splatters from Gorgeous Grunge to stamp a few splatters around.  I used the (retired) squares thinlits to punch out three little windows.  Next I stamped 3 of the kitty images on the card and colored them.  The punched piece was layered onto the card with dimensional tape.

I had a great weekend - what about you?  I've been shopping (on line mostly) for a new car.  I went to the dealership last week and test drove a Dodge Journey and looked at a few Jeep Cherokees.  So on Saturday, with notes in hand, Sonny and I went together to the Dodge dealership and met with Mark who sold Sonny his pick up a few years ago.  By the way .... Mark looks so much like Luke Bryan, he could have sold me anything!!  I ended up getting a Jeep Grand Cherokee Laredo in a charcoal color.  I would have preferred a different color but there were not too many colors to choose from with all the details that I wanted - navigation, large screen, back up camera, Sirrius/SM radio, etc. etc.  This one did not have the navigation package or the heated seats that I wanted but Mark gave me a pretty good deal on the Jeep and I convinced him if I was going to settle on the color, he had to throw in the navigation package for free.  Yes, I know nothing comes free but they make it seem like it is.  Ashley has suggested I just need to add some pink accents - get a pink ribbon sticker for the back; find something girly for the antenna; and get some pink seat covers!!  Not sure about all that but we'll see what I come up with. 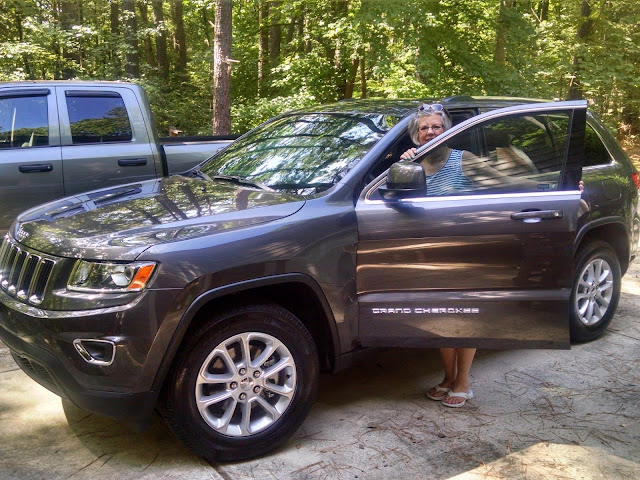