Wow!  It's Thursday already.  Where has this week gone?  Definately not to posting on this blog ... sorry about that.  Yesterday was my Newcomers Coffee.  We had an antiques expert there who assessed some of our valuable antiques and gave us an estimate of what they were worth.  I took in a couple of items and learned a bit about them.  I have a beautiful porcelain pin that was my grandmothers.  Her son brought it back to her from France when he was in the Army in the spring of 1946.  On the back, it says "Imoges France".  Turns out these were popular for soldiers to purchase back then for $5-$10.  But it is worth a bit more than that now.  He estimated about $50.  (I was hoping for more!)  I also took in a stein of Sonny's that was given to him by my mother's cousin.  It has a German slogan on the front that loosely translates to "Dr Luther speaks well, Water alone does not make you happy"  Turns out it is worth more than my pin - around $100.  Really, what difference does it make?  These are our treasures and we will not be selling them! 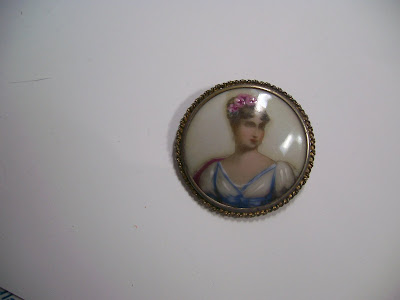 I received a bunch of new goodies Tuesday but have not had time to play with them much.  This morning I was determined to make a card with something new.  So, I got out the Northern Flurries embossing folder and a piece of SU's vellum.  (I love their vellum because it is thick similar to cardstock.)  I ran the vellum through the Big Shot with the Flurries folder and dabbed a little glue on the back where the snowflakes were so it wouldn't show through.  Then I glued it to a piece of Bashful Blue cardstock and tied a Bashful Blue bow on the front.  The final touch was adding a few little pearls to the center.  Voila!  A Christmas card .... my first!  It was so simple but looks so gorgeous. 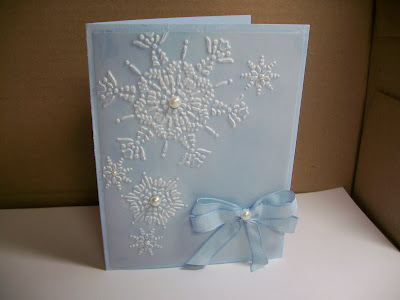 I love SU's embossing folders ... combined with the Big Shot, you just get such a deep impression and it shows up so well.

Well, I am off to a luncheon at a friends house.  One of friends and neighbors moved away a few months ago.  She is back this weekend so we are having a luncheon for her.  I am making brie in a new brie pottery bowl that Ashley gave me.  Hope it turns out!!  I am going to top it with a little Pepper Jelly and pecans.
I love comments! Sharon at 9/02/2010 No comments: Links to this post