The past few days I have been making Christmas tags.  I don't know about you, but I don't ever have enough tags to put on the packages that I wrap.  I like making my own tags instead of buying them.  Also, in December for my Stamp Club, I put the materials out and a few samples and let my members have fun either creating their own tags or copying mine.  I also stumbled across a Tag Challenge today so I thought I'd include my tags in their challenge.  Check out the cute tags at SU Only Challenges. 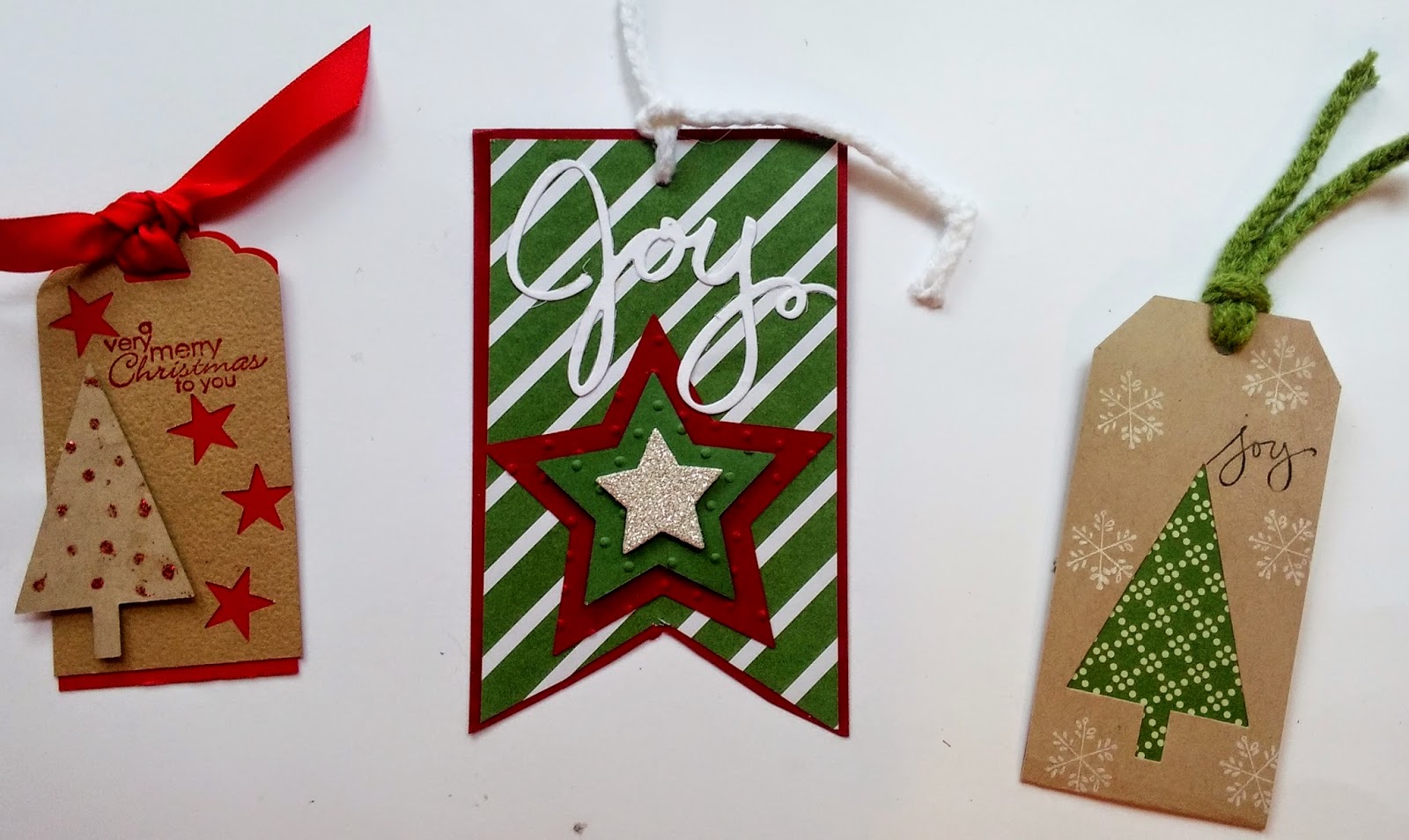 Here are the other tags that I have made: 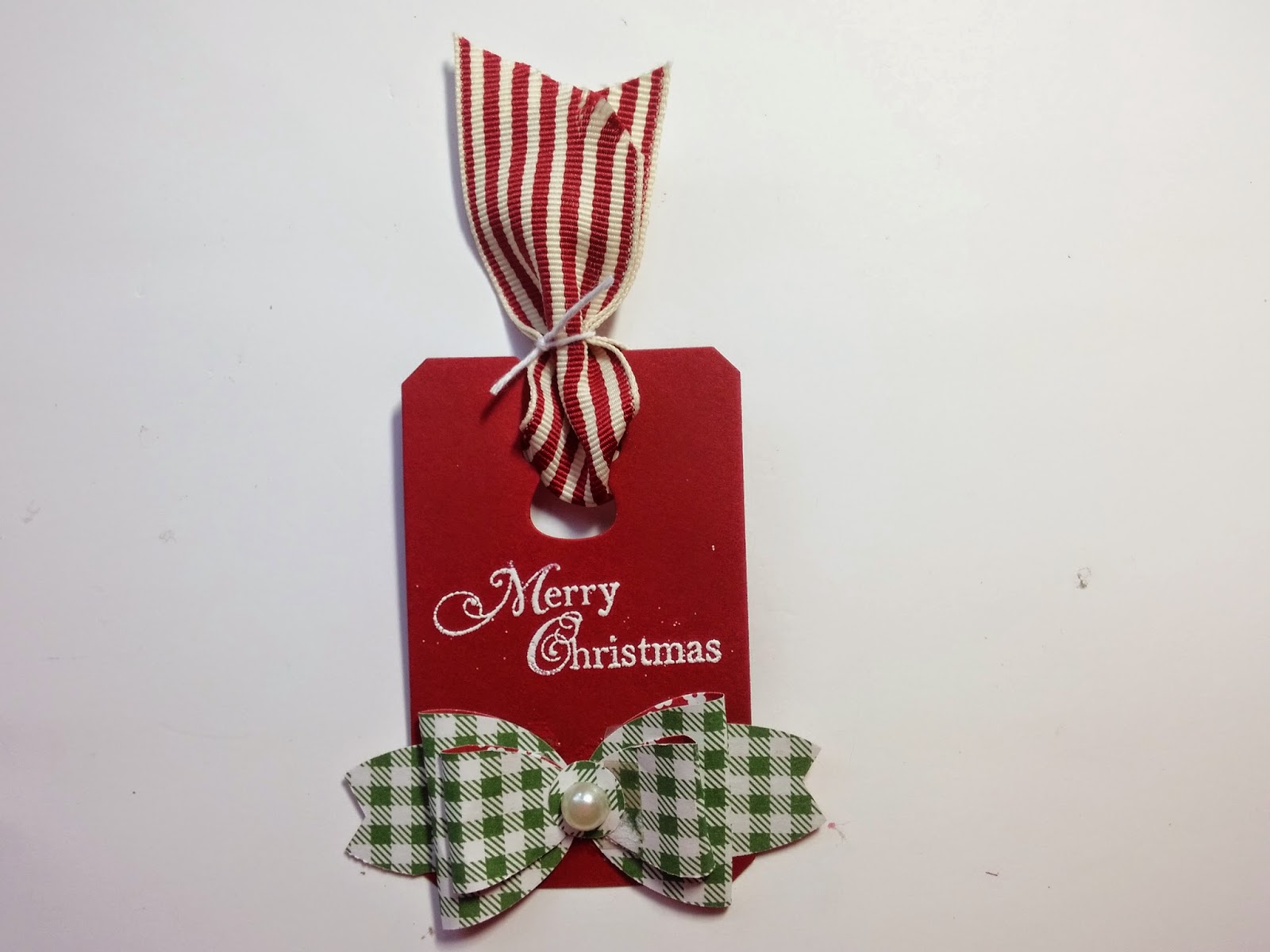 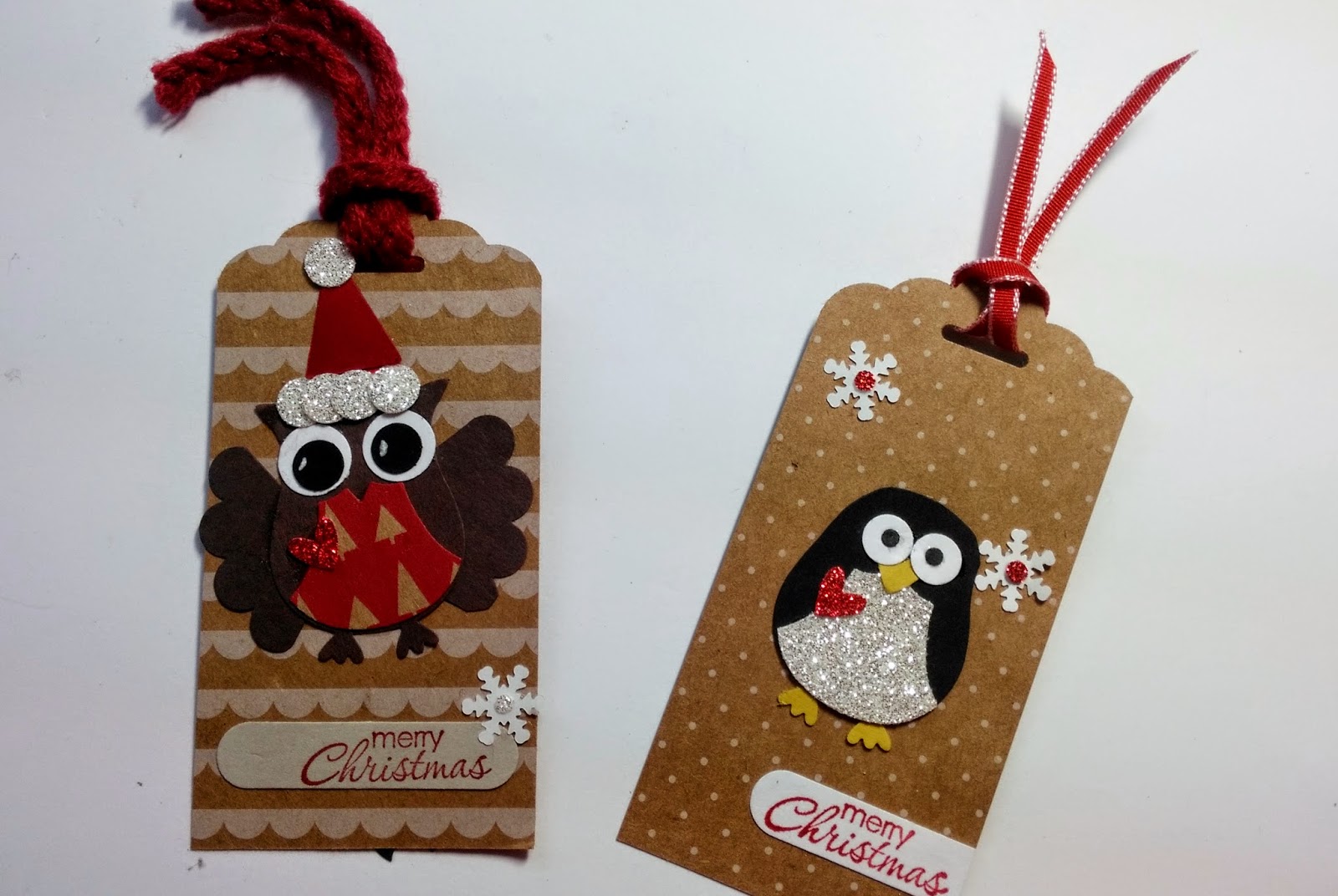 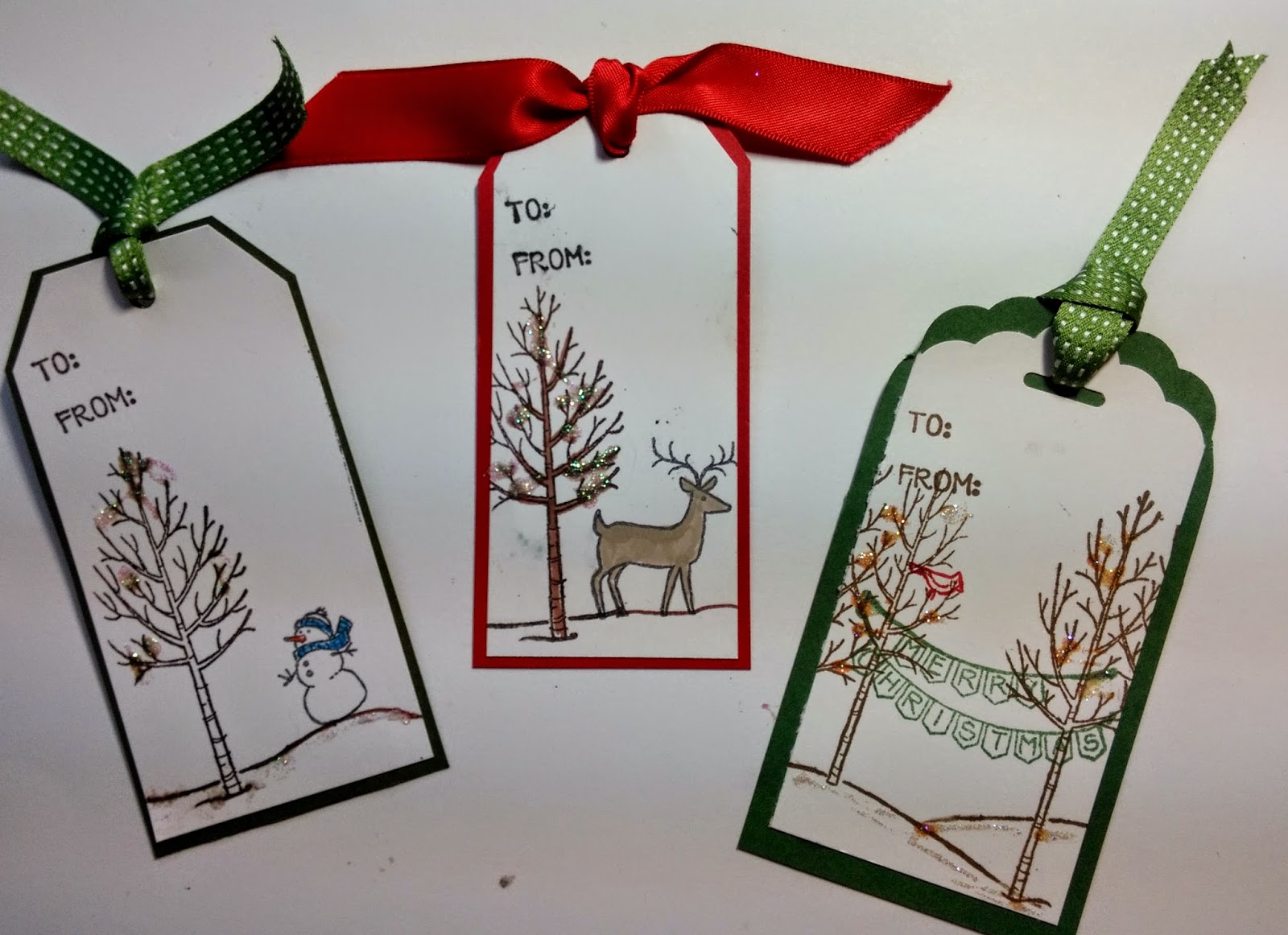 Pagans and Druids believed the evergreen boughs would ward off evil spirits, witches, ghosts and illness. In the Northern Hemisphere, many ancient people believed the sun was a god and believed when winter came, this god became sick and weak. The shortest day and longest night  of the year, better known as the Winter Solstice, falls on December 21st or December 22nd, depending on the Gregorian calendar and leap years.  No matter what the group of people were or whence they came, they celebrated this day with great joy because it meant the sun god would begin to get well again. The Pagans used evergreen boughs to decorate their homes because they reminded them of all the green plants which would grow again when the sun god was strong and summer would return. Ancient Egyptians would fill their homes with green palm rushes, symbolizing life over death. The Druids decorated their temples with boughs  as a symbol of everlasting life.

Germany is credited with starting the Christmas tree tradition in the 16th century when devout Christians brought decorated trees into their homes. Trees were decorated with fruits and nuts. Martin Luther, a 16th century Protestant, is believed to be the first to add lights to a tree. While walking home one night, he was astounded by the brilliance of the star lights twinkling amongst the trees. In trying to recapture what he saw to his family, he erected a tree in the main room and wired candles to the boughs.

Most 19th century Americans found trees an oddity. Although the German settlers in PA had community trees as early as 1747, the first recorded Christmas tree was in 1830 by the same people. Even as late as the 1840’s most Americans still considered the trees as Pagan symbols and not accepted.
In 1846, the popular royals Queen Victoria, her German Prince Albert and their family, were sketched in the London News standing around a Christmas tree. Being very popular with her subjects, what was done in court immediately became fashionable. Not only in Britain but also fashion conscious East Coast American Society!

Typically Europeans liked their trees to be about 4 feet tall whereas American liked theirs from floor to ceiling. (Americans always want bigger and better!)  By the 1890’s Christmas ornaments were arriving from Germany but most American’s preferred decorating their trees with fruit, popcorn laced with berries and nuts and homemade ornaments. When electricity was introduced, that is when the big change in how American’s decorated their trees. Throughout the years we’ve seen trees in various colors, lights ranging from a color wheel to strings of icicles, and an array of ornaments. But the tall, live fir tree remains to be the popular tree for most people.

So there you have it - have you learned something today?

Here are the tags that I offered to my group this week.

These were cut using the Apothecary die and the Big Shot.  I stamped them with the Watercolor Winter stamp set. 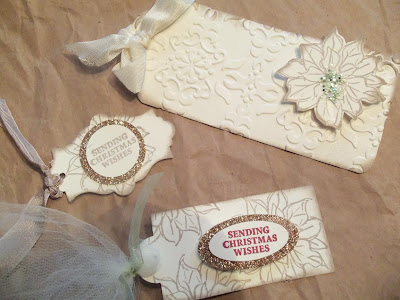 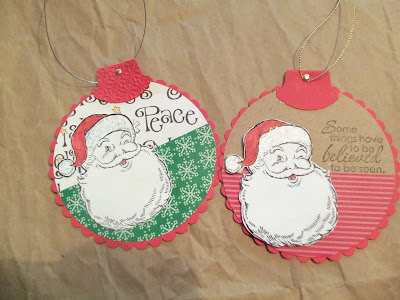 This ornament is made using the Ornament stamp set and dies. 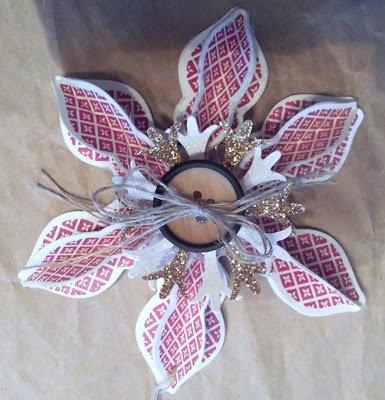 This cute little Santa tag is made so you can write underneath his beard. 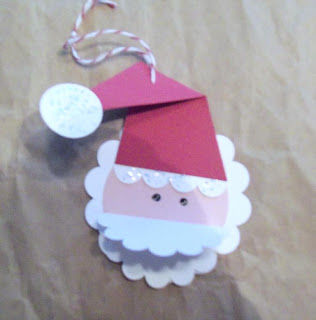 Both of my clubs met last week for a little tag making party. It was my gift to my club members - ﻿they didn't have to order anything and I made Christmas tag and gift card samples for them. They had fun making the projects. We are going to start making Christmas tags earlier next year - maybe do one each month so when it's time for Christmas, we'll have enough. Of course, if they were procrastinators like me, they wouldn't have their presents wrapped early and doing the tags a couple of weeks before Christmas would work!

I finally had a little bit of time yesterday to play with my new Peekaboo Frames die.  I know a lot of people ordered this die to make Advent Calendars but that was not my intent.  I wanted to make tags and cards with it with hidden messages.  So yesterday, I set out to make a bunch of tags.  My Stamp Clubs are meeting this week on Tuesday and Thursday and we are making tags and gift cards.  Here are my samples using the Peekaboo Tag Die which is on sale now in the Winter Mini Catalog! 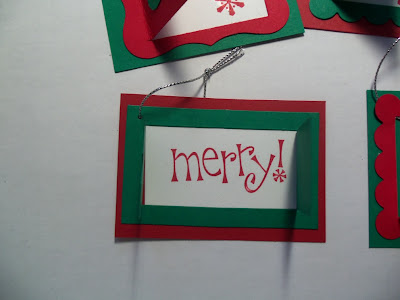 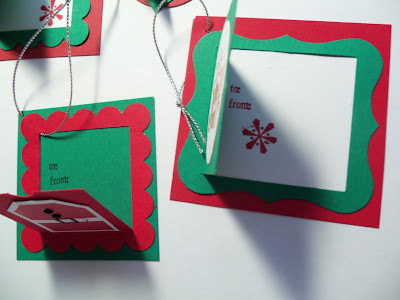 Aren't they cute?  I used Real Red and Glorious Green (retired) cardstock and various Christmas stamps that I had.
I love comments! Sharon at 12/13/2011 No comments: Links to this post