My hubby is on his way home.  I think he is a little jealous that he missed our impromptu surprise guest last night.  Ashley has been at Yale (Connecticut) meeting with a couple of professors that she will be doing a research project with since Sunday.  She was scheduled to fly home last night.  But unfortunately, she had to go through the Dallas airport.  Since there were 6-13 tornadoes that hit that area yesterday, the Dallas airport was closed.  When she called to tell me that, I suggested that she see if she could get re-routed to Charlotte.  And she did!  I picked her up at the airport a little after 9 pm and we paid an unexpected visit to her grandmother who was quite surprised to see her.  She came home with me; we watched The Voice; went to sleep and I drove her back to the airport this morning for a 10 a.m. flight.  Short but sweet visit!
I also have had another visitor since Sonny left .... Sammie, my mom's cat!  For some reason, the cat does not like my mom and has bitten and/or scratched her several times in the past year. (Might have something to do with the fact that Mom is legally blind and probably steps on Sammie!!)  He did it again while I was in Texas and we decided that was enough.  My sister, Angela, took Sammie to the Humane Society last Wednesday but they wouldn't take her.  So, I told her to bring Sammie to my house and I would keep her until Sonny returned and we found a no kill shelter for her.  Unfortunately, we have not found anyplace for her and I am getting more and more attached!  The funny thing is I have hardly seen Sammie since she's been here.  She's the type of cat that likes to stay hidden and wants to play with you on her terms.  It took me a couple of days when she first got here to even find her.  I finally found her under the couch.  But once I found that spot, she found another hiding spot - in my closet on a shelf!  I discovered that spot by accident so now she hides behind my clothes and shoes on the floor.  Ashley looked for her last night while she was here - in the closet - and told me she wasn't in there and shut the door.  I opened the door and there she was!  She did come out of hiding last night while Ashley was here and we played a while before bed time.   So, I may have inherited myself a cat!  We'll see when Sonny comes home. 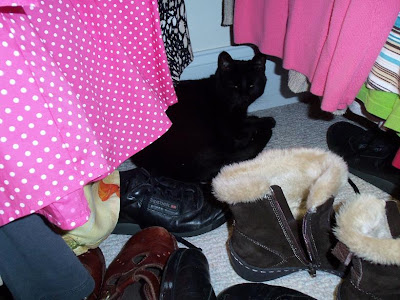 I love the name of Stampin' Up!'s April Promotion…Summer Smooches.  Since Summer is such a great time of the year,  the products put me in mind of all the fun activities to do in the summer.  The cute little set, Bright Blossoms, is just SO fun and fits my idea of summer.  AND… the Summer Smooches Designer Paper is so bright and cute and wonderful, I know it will be a favorite!   Fabric Buttons, Fabric, a new PURSE die, ribbon, a Decor Elements Stencil…just look at all those great things!  Stampin' Up! is giving YOU, our customers, a chance to get the Summer Smooches products early in April, prior to it being released in the big catalog on June 1st!  So…take advantage and order yours today!
You can order Stampin' Up's Summer Smooches products now!

Products in the Summer Smooches suite (click to see) will only be available through April 30--and then won't be available again until the new 2012-2013 catalog is released. 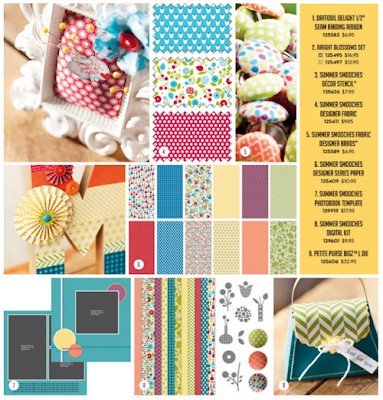 The Retired Accessories/Décor Elements Lists will be released on April 25, 2012. 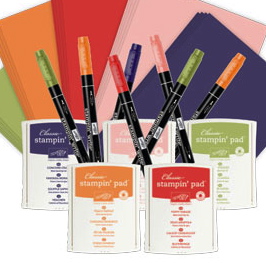