As promised, I am sharing the rest of the cards I made over the weekend using Sweet Summer.  I now want to make a little coordinating card box to put these in. 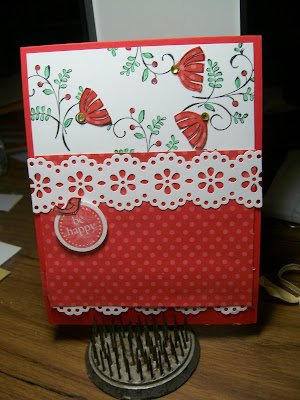 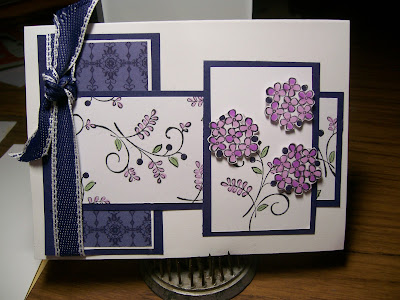 Here is a close-up of the flowers that are popped up: 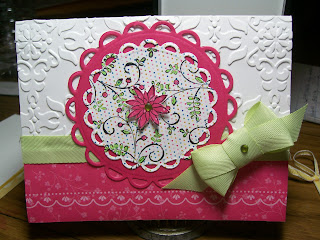 Which is your favorite????

Email ThisBlogThis!Share to TwitterShare to FacebookShare to Pinterest
Labels: In Colors, Sweet Summer

We went with some friends last night to see the comedian, Gallagher.  He was performing at the Galway Hooker in Cornelius which is one of our favorite restaurants in the area.  I have never seen Gallagher perform live but used to watch him back in the 80s on tv. His shows were always filled with long monologues of social commentaries, but he gained attention for his surreal, incongruous props - a giant couch-shaped trampoline, an oversized Big Wheel bike, and of course, the Sledge-O-Matic. He was always so funny and at the end of his acts, he would always smash a watermelon with a mallet spraying it all over the first few rows of the audience.  We were a little concerned last night because The Comedy Zone at Galway is pretty small.  But, it was ok - he didn't smash a watermelon.  Although I think he may have earlier in the week when he performed in Charlotte.  Gallagher has definitely gotten OLD!!  He's now 64 and makes fun of the aging process.  Sonny and I could relate to a lot of his observations!!  His comedy is probably not for everyone - he makes fun of gays and blacks a lot.  But, if you can overlook that, you will laugh at him.  We had a great time.

I've been on a spree making cards lately.  Sunday I concentrated on one of the stamp sets in the Sale-a-bration catalog, Sweet Summer and made several different cards in the in-colors.  I will share a couple with you now and show the other ones tomorrow. 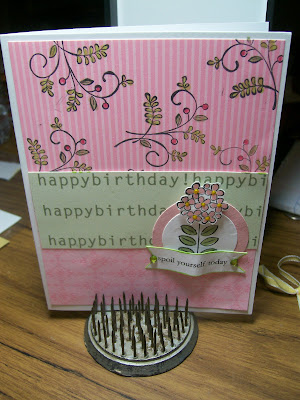 For this card, I used the In-Color Patterns Designer Pack (pg 175) - Blushing Bride.  Since it is double-sided, I used the stripe side for the top and the pattern side for the bottom of the card.  The green "happy birthday" strip, I created in My Digital Studio but you could also easily do it with any word processing program.  I stamped the flourish from Sweet Summer on the striped paper and used markers to color it.  I stamped the leaves on a white 1 1/4" circle that I layered onto 1 3/8 pink circle.  I stamped the flowers, colored them with markers and cut them out.  It's hard to see but I dotted each middle with a Pearl Pen.  I wish I could tell you where the sentiment came from, but I don't remember!!  I put some bling on either side of the sentiment and "poofed" it up in the middle. 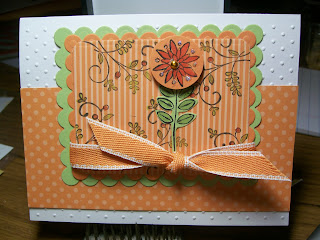 Again, I used the In-Color pack but this time it's Peach Parfait.  I used the Dotted Swiss embossing folder on the white card.  I cut the scallop pieces - Peach and Pear - with my Nestabilities.  I stamped the flourish from Sweet Summer directly on the striped paper.  I stamped the leaves on Pear Pizazz and cut them out.  I stamped the flower onto Peach Parfait, colored it with markers and punched it out with the 1" circle punch.  I added a little bling to the flower and a piece of Peach Parfait ribbon to the bottom.
I love comments! Sharon at 3/09/2011 1 comment: Links to this post