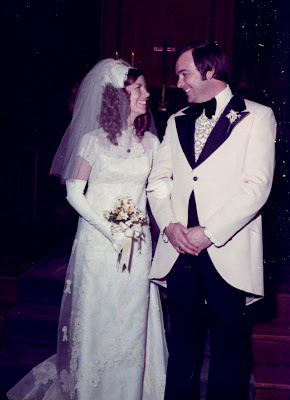 Today is our 39th wedding anniversary.  Wow!  Hard to believe.  We've had our ups and downs like any couple but hung in there and made it work.  I think young people today don't understand that concept.   I read an article several years ago that said statistics tell us that first marriages today stand a 45 percent chance of breaking up and second marriages a 60 percent chance!  That's a lot!  Divorce has increased not only in frequency but also in acceptance it seems like. And even if we don’t focus on figures per se,  today far more marriages end in divorce than a couple of decades ago.  I attribute a lot of these failures to the "Me-Now" generation.  Why stay in a difficult or loveless relationship? Move on! Find whatever it is that will provide happiness.  I grew up and saw divorce in my own family.  My mother was divorced when I was about 2 years old, my grandparents divorced (but later remarried plus it was a family secret about their divorce and I didn't even know it until I was in my teens because they had always been together in my lifetime.); my uncle was divorced, my aunt was divorced .... So, my cousin, who was my best friend back then, and I were afraid of marriage and determined that when we did marry, it would be forever.  Unfortunately, that was not the case with her - I think she is on her third or fourth marriage.  So you can understand how important 39 years together is to me.  Just hope we live to make it to 50!!
Here is the card I made for Sonny.  I saw the sentiment on the front of the card somewhere and just knew I had to use it.  I created the circle with the sentiment on My Digital Studio, printed it and punched it out with my Nesties.  I used the Nautical DSP that is now retired (but I can still get it on MDS.)  The DSP trim piece was cut using the Tasteful Trim Sizzix Die.  The heart stamp is from the SAB set, Sprinkled Occasions. 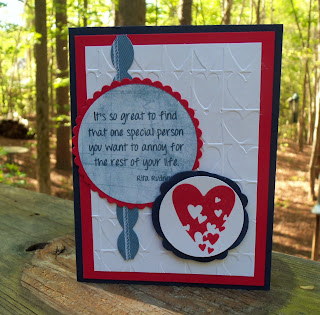 This is one of the cards that I made yesterday.  I just love it!  This will be perfect for St. Patrick's Day, don't you think?  I CASE'd the idea from a display from Leadership. 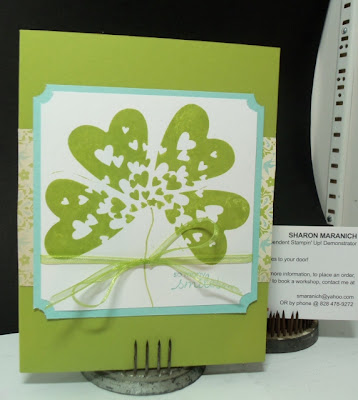 What is so great is that most of the items used to create this card you can get for FREE!  The stamp, ribbon, DSP, and Card Stock are all from the Sale-a-Bration Catalog !!  The stamp set I used is Sprinkled Expressions. I usually don't like solid stamp sets like this one because I have a hard time getting a good impression.  But so far, so good - this set has not given me a minute of trouble - great impression every time.

Supplies used:
So if you want to get the FREE items to make a card like mine, contact me today.
I love comments! Sharon at 2/06/2012 No comments: Links to this post