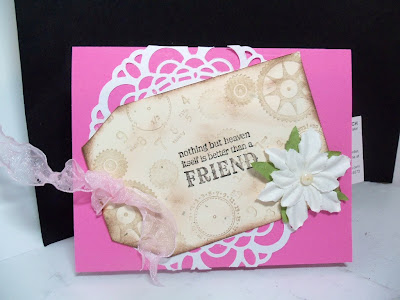 Here is a card I made last month to send to an old friend who has been having all kinds of medical traumas.  I hope it cheered her up!  I found the tag shape in a stash of stuff I had.  It was already distressed and had the background stamped on (from It's About Time) so I stamped the sentiment (from Blessings from Heaven) and tied a pretty ribbon on to it.  I used my heat gun to melt the ribbon a bit and make it crinkle up.  I found a flower in my jar of flowers and using a glue dot, attached it to the card.  The doily is cut using the Doily Die.  A pretty simple card but sometimes simple is best.
I love comments! Sharon at 4/10/2012 No comments: Links to this post

The human mind is kind of like a piñata.  When it breaks open, there's a lot of surprises inside.  Once you understand that, you see that losing your mind can be a peak experience.   I fully intended to post a card on my blog last night.  But, I haven't broken open the pinata I guess and I forgot!
We went to the hockey game (Charlotte Checkers) in downtown Charlotte last night with friends.   It was fun even if they did lose.  We had dinner first at a small little NY deli bar/restaurant that Sonny had gone to about 3 years ago and has been looking for it ever since.  (He hasn't cracked open the pinata either!)  It was a neat little place right on the corner of 5th and Tryon so I don't know why we didn't see it before.  I'm sure we've walked by it plenty of times.  Oh well - we know where it is now.

When we got back home, I watched what remained of the Grammy's.  I hate that I missed the Beach Boys come back performance.  I was a HUGE Beach Boys fan when I was in high school.  I thought L.L. Cool J did a good job of hosting the event.   The death of Whitney Houston the day before definitely put a pallor on the awards show but Jennifer Hudson's ode to her, singing "I Will Always Love You" was fantastic.  Whitney had such a gift.  It is too bad that her demons got the best of her.   I thought the performer, Nicki Minaj, was insane doing whatever it was she was doing (can't call it singing) with an exorcism performance.    What a freak!  I loved seeing Glen Campbell perform although I hardly recognized him.  He is a true legend and it is so sad that he is suffering from Alzheimers.  Campbell was another of my favorites 'back in the day."  The audience gave him a standing ovation .... EXCEPT for two gals who were caught on camera tweeting on their phones.  It's sad that you can't put your phone down for 5 minutes.  So rude!  And then there was Sir Paul!  Love him!  Sorry I missed his earlier performance but was glad that he performed a medley at the closing of the show.  He did a few songs on the piano which I loved and then took up the guitar and and was joined by Joe Walsh, Bruce Springsteen and a member of the Foo Fighters (not sure his name).  He may be 69 years old but he still has IT!  I guess the real star of the night was Adele who walked away with it all practically.  Her speech at the end for Album of the Year was so funny!  I didn't realize she had such a Cockney accent - she acknowledged her mom by saying "Mom, the girl did good" and spoke of a "rubbish relationship" that was her inspiration for the album.  And then amidst the tears, she acknowledged that her nose was running and said "I've got a bit of snot" in that marvelous accent!  That was priceless.  It reminded me of the English waitress who told me something was a "bit of a shit" last year when we were in Nottingham.


OK - I do have a card to share after all that!  It is a vintage-y card using a great DSP - Well Worn and no stamping! 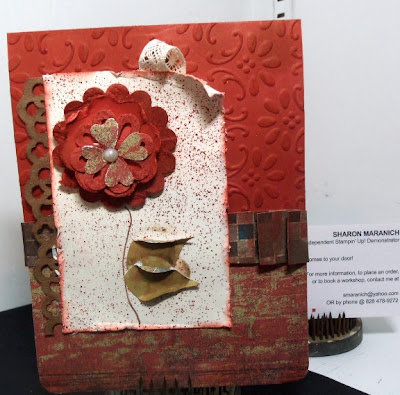 The supplies I used are all SU - no stamps but a lot of accessories!


I pleated the Well Worn DSP by scoring a strip every 1/2" and folding it.  I ran tape all along the back of it to adhere it to the card. 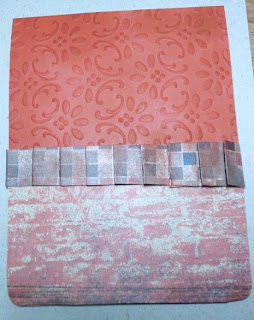 Here is a close of the flower. 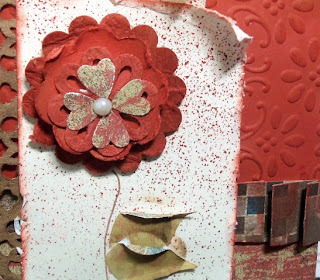 I punched out a Scallop Circle (Cajun Craze) for the bottom layer; the next 3 layers are punched with the Blossom Bouquet Triple Layer Punch.  The top layer (from Well Worn DSP is punched with the Heart to Heart punch (4 hearts) with a pearl on top.  They are all layered with dimensionals.  The leaves are punched out with the Blossom Petals Builder punch.    I used the Color Spritzer on the Vanilla rectangle with the Cajun marker to splatter.


Hope you have a great Tuesday and a wonderful Valentines!
I love comments! Sharon at 2/14/2012 No comments: Links to this post

Sonny painted the last room yesterday .... unless I can convince him to paint my stamp room.  I just don't know if I want to move everything - again - to paint!  He's not real anxious to paint anymore either.  Maybe I'll just wait a few months!!   The pink bedrooms turned out really pretty.  Here are a few pictures of one of the guest rooms.  It is my vintage room.  I have a lot of things from my grandmother's house - really old stuff!

Hope you enjoyed the tour of my guest room!  Now Sonny & I are off to the movies.  Enjoy your weekend!