Build A Birthday with Pop Up Candles


Sorry - I've been MIA for a while!  Busy, busy, busy!  Think I'm ready for convention though.  I finished up Stamp Club yesterday and got my order sent in to Stampin' Up.  After cleaning up, I was going to finish up a few of my 3D swaps that I had started over the weekend and start packing.  Well .... Mother Nature had other ideas.  We had a storm here and our power went out!  We were without power about 3 hours.  I was able to work with just the light coming in the window for a little bit.  Then it wasn't enough so I retreated downstairs where I read in my Kindle, napped and finally decided I'd just have to eat cold cereal for dinner.  Around 8 pm, Sonny and I started lighting candles.  We had just gotten the last one lit, when "ta-da", the lights came on!  So, blow out the candles and start packing!  Think I got to bed close to 1 a.m. this morning!

Here is a card I made last week from a tutorial I found on-line. 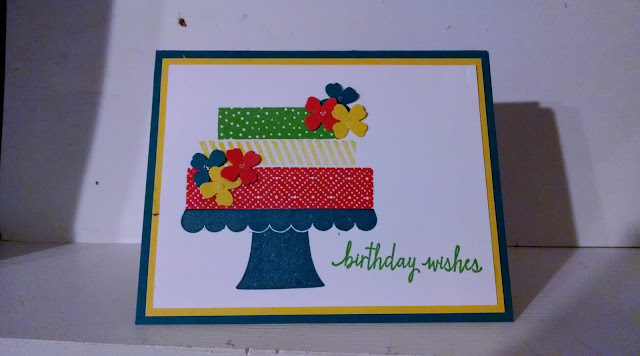 I used Build A Birthday to make the cake with Pacific Point, Watermelon Wonder, Daffodil Delight and Cucumber Crush. 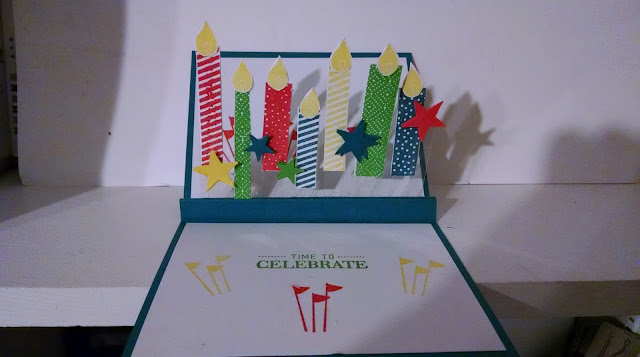 The fun part is when you open the card and the candles pop up!  They are adhered to strips of clear transparency.

Email ThisBlogThis!Share to TwitterShare to FacebookShare to Pinterest
Labels: build a birthday

There is a really cute birthday stamp set in the catalog this year called Build a Birthday for only $16!  Below are two cards I have made using the set but you will be seeing more in the very near future! 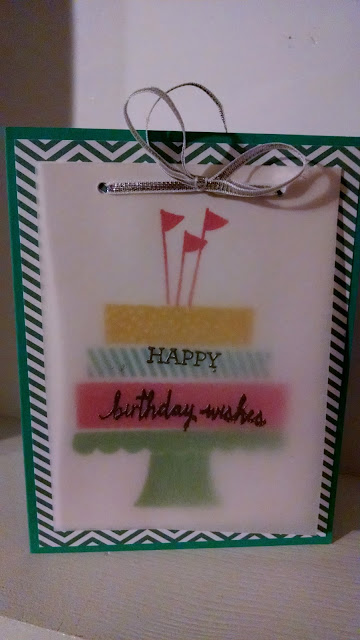 On the card above I stamped the cake layers on to white cardstock and stamped the sentiment on a piece of Vellum card stock and layered it over top of the white.  Then I punched little holes in the top of both pieces and threaded the silver ribbon through it, tying it into a bow.  I adhered it onto a piece of Lost Lagoon DSP (unfortunately, I realized just now that the DSP is retired!).  The base card is Lost Lagoon card stock. 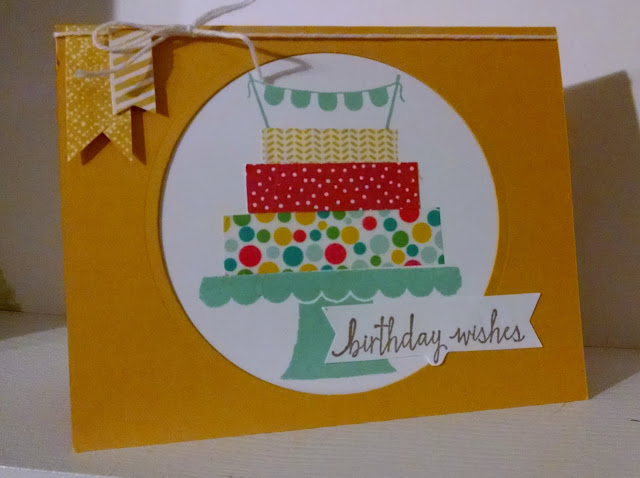 The second card (above) is directly from the catalog.  I participated in a recent "Copy the Catalog" swap and this is the card that I made.  The top and bottom layer of the cake is  Cherry on Top Washi Tape.

One of the neat things about this set is that you can use the stamps as cake layers or as candles!

Yesterday was one long day!  I don't know how just sitting around all day can make a person so tired but that is what happened to me yesterday.  I took mom to the hospital at 11:45; she was finally wheeled back for the scope a little after 1:00.  Poor thing - the nurse really had a hard time trying to put the IV in her arm.  She finally got one in on the third try!!  And Mom is going back for another procedure today and another IV!  As it turned out, the doctor's suspicions were on target.  A pill had gotten stuck in her esophagus and formed two ulcers on either side - called Kissing Ulcers!  He had no way of knowing which pill it was as it had dissolved by that time.  But he said there were several pills that were the worst for that happening and two of them mom is taking - Fosamax and an antibiotic.  He said to prevent this from happening, you should follow three rules when taking meds:
One of the things I harp on my mom about all the time is to drink more.  She just doesn't.  I hope she will listen and start drinking more water.  He also gave her a diet of things she should and should not be eating.  I know she will have a tough time following that though!  Some of the things to avoid:  coffee (she loves her coffee), fried foods, french fries, ice cream, citrus, carbonated beverages, citrus (she loves lemon in her tea, water, coke ....), creams, gravy, chocolate .....  When I got her home yesterday, I found a chicken breast in the freezer and baked it with a tiny bit of Teriyaki sauce to give it a little flavor and cooked some lima beans.  She was able to eat most of it if it was cut up really small.  But her favorite thing has been the smoothies I  have been making for her!  I have just been putting milk, fruit (peaches, strawberries, blueberries), yogurt and ice in a blender and she drinks them down!  My sister is taking her today for her tooth extraction.  I think she wanted me to take her but this is Angela's day off and she can do it.  I am exhausted!  I am going to get busy getting cards together for stamp club next week.  Plus I just signed up for one more swap at convention so need to figure that out too.  It is only for 12 cards so not too bad.
I love comments! Sharon at 7/09/2015 No comments: Links to this post

Email ThisBlogThis!Share to TwitterShare to FacebookShare to Pinterest
Labels: build a birthday, Family