Hope you had a safe but fun Labor Day!  I did.  On Saturday, we went to the movies and saw No Escape.  It was not the best movie I've seen and was quite bloody but it was entertainment for the afternoon!  On Sunday, we braved the heat and took our boat out.  It was not as hot as it has been but it was not cool either!!  Monday, we drove up to the mountains thinking the temps would be a lot cooler - not so.  We went to the Apple Festival in Hendersonville - a couple of hours from us.  Hendersonville is a really nice little town and one we will return to visit in the future.  Most of the tents selling things were gone but we were still able to get some delicious NC apples - honeycrisp - my favorite!  We watched most of the parade but after a little over an hour, we decided to cool off in one of the two Irish bars that were downtown.  Later we found a German restaurant a few blocks away and had dinner.  Oh my!!  It was delish!!  Sonny has already put it in his GPS as a favorite with intentions of returning.

I was able to get a little stamping done too over the weekend.  I mailed this card to my daughter-in-law's oldest daughter for her 21st birthday which was Sunday.  I am quite pleased with how the card turned out. 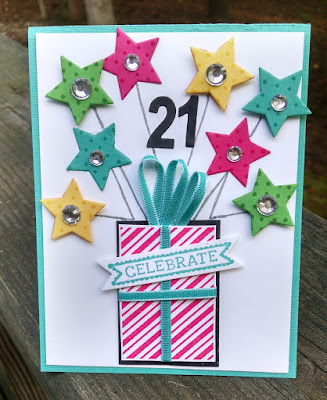 I used a stamp set from the Holiday Catalog - Your Presents - which I received from convention.  It is great that this set is not just for Christmas.  The stars are from the Star Framelits and I stamped on them using a really, really old and retired stamp set - Itty Bitty Backgrounds.  The "21" comes from the Numbers Framelits.

The best news of my weekend was that ..... Ashley made it back home safe and sound!!  She left Guam Friday around noon (which was Saturday, noon, for her) and arrived in San Antonio on Saturday around 6:30.  So, she had two Saturdays!  Her friends made a "welcome home" sign and greeted her at the airport and another one of her friends had a welcome home sign on her front door when she got home.  Not sure when we'll see her but it sure was great to just pick up the phone today and call her.
I love comments! Sharon at 9/07/2015 1 comment: Links to this post