This has been a week of doctor's appointments and taking care of my mom.  She has not had a good week.  I may do like these butterflies in this card and just fly away!! 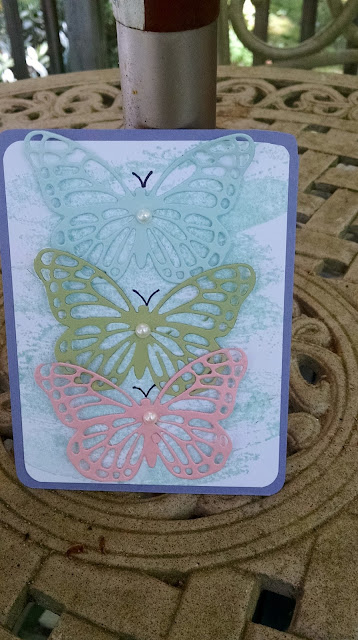 This is another swap card that I have made for convention.  I used the Watercolor Background stamp for the background (Pool Party stamped off) and then just die cut 3 butterflies from the Butterfly Framelits and adhered them to the center of the Whisper White cardstock.  The corners are rounded and the white card is adhered to a Wisteria Wonder card.  I drew in the antenna with a black Sharpie marker and added a pearl to the center.  Quick and easy card.

Mom called me on Tuesday complaining of her ear hurting.  It was on the same side as her teeth that she is having extracted next week so I assumed they were all tied together.  I took her to the dentist and they gave her another prescription for an antibiotic.  Then yesterday she bent over to pick something up off the floor and pulled her back out again.  She has been going to the chiropractor now for a week and was feeling much better - even, quit taking pain pills last weekend.  So, I took her to chiropractor yesterday and he did a few adjustments.  He thinks she will probably need to have a cortisone shot.  But she is going back to see him this afternoon and he will decide then.  My sister just texted me that she had a rough night and was really hurting today.  I am headed over to pick her up this morning for her pre-op appointment at the hospital for her teeth extraction!  In the meantime, I realized yesterday that I had missed my doctors appointment that was scheduled for Tuesday!   Hoping things will calm down soon!

Ashley finally made it back to Pohnpei safely and went straight in to work.  She is having her phone interview today for the Pediatric Program Director at Madigan in Washington.  Keep your fingers crossed for her!  She is guessing they will make the decision in the next couple of weeks.  She feels like she is fighting an uphill battle since she is the only "outsider" applying for the position.  The other candidates are already at Madigan although that is where Ashley did her residency so she won't exactly be a newcomer.
I love comments! Sharon at 7/02/2015 1 comment: Links to this post

Hope your weekend was a good one.  We had beautiful weather this weekend so Sonny and I took advantage and went out on the boat Sunday.  I made the mistake of not applying sunscreen (didn't realize it was as hot as it was) and got a little sun on my arms and back.  I'll know better next time!

I made several cards today in preparation for my upcoming All Occasions Stamp a Stack.  It is Wednesday, May 7 at 2:30 p.m.  If you live in the area, you are welcome to come.  We will be making 20 cards - two of ten designs - and you can mix and match the sentiments.   Here is one of the cards we will be making. 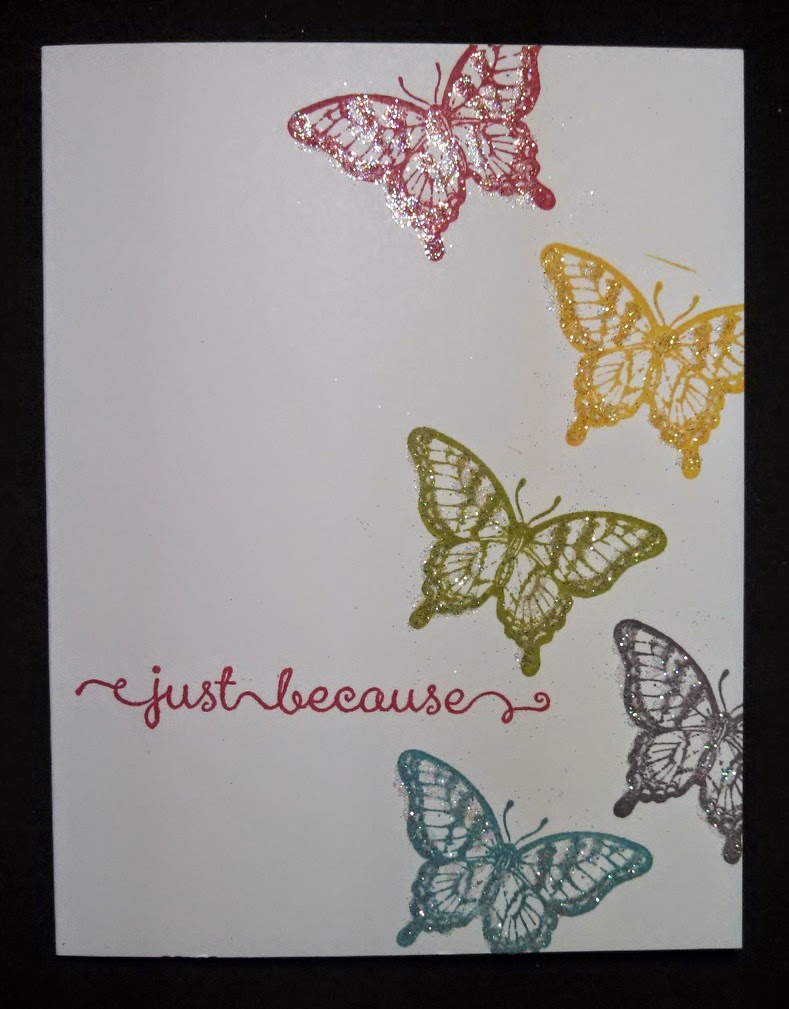 I think this is my favorite.  It's so much prettier in real life.  Each butterfly has Dazzling Diamond (glitter) on it and just sparkles.  Hopefully, Stampin' Up is coming out with another kind of glitter since the Dazzling Diamonds has been discontinued (and is sold out).

I'm excited for tomorrow.  I'll be going to Raleigh with some other demonstrators for the Catalog Premier.  I can't wait to see the new catalog.  Every year this is such a great surprise and we demonstrators get so excited to see what's new and what has made it to the big catalog from the year's mini catalogs.
I love comments! Sharon at 4/27/2014 No comments: Links to this post

Ashley was here for a fast week and we stayed pretty busy, as usual.  We stayed home on Friday and most of Saturday and played around in my craft room.  Ashley made some great cards and I managed to take pictures of them before she packed them up.

We have been seeing a lot of butterflies around our yard this summer.  Guess Stampin' Up has too - now you can as well!!  Stampin’ Up! announced a new bundle - it’s available starting NOW and through September.  While they were at it, the little elves over at Stampin’ Up! also released their September Best of…set a little early.

Click HERE to see the details on the flier.

While you are snatching up this bundle offer, you can pick up September’s Best of stamp set … Best of Autumn.  It's a really good one this month.  For just $14.95, you don’t want to miss this deal.  Click HERE to see the images of this month’s set:

Email ThisBlogThis!Share to TwitterShare to FacebookShare to Pinterest
Labels: Best of Stamps, butterflies, stampin' up sale

I think this week is going to go too fast for me!  Ashley arrived Thursday night and we have been on the go ever since!  Friday she and I went with the Newcomers group and toured the Charlotte Motor Speedway.  We even got to go around the speedway (80 mph) in a van.  It was really cool!  I'm not into racing these days but I grew up going to races, camping in the infield and knowing a little bit about racing.  My dad and uncle used to drag races and I can remember going to those dirt tracks on Friday nights to watch them.  We had lunch at the Speedway Club which was really nice.  What a great view of the track while we were eating!!


Later on Friday, Marianne came over after she got off work and spent the night.  Sonny and I took our guests to the best places in Sherrills Ford!  First we went to Drum's for dinner .... catfish and shrimp!!  And after dinner, we had a few beers at Horsefeathers before returning home.

Saturday we picked up Mom (who was excited to see her granddaughter!).  Ashley, Mom and I had our pictures made and then came home and changed into our swim suits.  Sonny had the boat ready and we went out for a ride.  The rest of the family joined us later - Marianne's husband and boys and Angela.  We came back to the house and Sonny grilled chicken and veggies for us.  It was a great family time.  Just always wishing ALL our family could be here - my brother and his family and my son and his family!  I miss them so much!

On Sunday, our plans got changed a little bit!   We had planned on taking the boat over to the Rusty Rudder in the afternoon.  There was a couple of guys playing from 4-8 that will be on our Alabama cruise and who have also been on Ashley's Rock Boat cruises in the past.  BUT, Sonny got a call from a friend of his who lives in our neighborhood who was on the lake and needing a tow back home.  His prop had hit something and broke.  It turned out that he was way on the other side of the lake from our house.  We left our dock at 1:00 pm and it was about 2:30 when we finally found them.  By the time we hooked up the two boats and towed him back, it was 6:30 pm!!  Luckily, Ashley and I decided to ride along with Sonny on the rescue mission so we enjoyed the sunshine and were able to visit with each other.  We decided to hurry up and try to make it to Cornelius to hear the band.  Well, wouldn't you know it .... we were 1/2 mile from our exit when we got stopped by a terrible accident on I-77.  A Ford Explorer flipped several times on the highway with a woman and 5 children having to be air lifted to the hospital.  By the time we got to the restaurant, Scott (Mumms) was just tearing down his set!  Oh well, Ashley visited with him a few minutes and we headed to another restaurant for dinner.

Monday we all went to the "Y" for a workout.  Ashley ran the track, Sonny walked the track and used the equipment and I took a swim exercise class.  Afterwards, Ashley and I had appointments for a massage.  We both got 90 minute massages and didn't want it to end!!  Then we met Marianne and went to a local "paint your own pottery" shop and visited while each painting our masterpieces!!  A stop at the Blue Star Café for dinner and we headed home.

Tuesday we plan on heading over to Ikea while Sonny is out at the shooting range.

I have had a little bit of time to be crafty (but not much!)  Last Thursday, I made a Butterfly picture that I have been wanting to do ever since I saw it in a friend's home.  It was soooo easy - didn't take me much more than an hour to do it.  I hung it in my guest bathroom.  I used the Sizzlit butterfly die as well as two Butterfly punches and embossing folders to cut all the different sized butterflies. 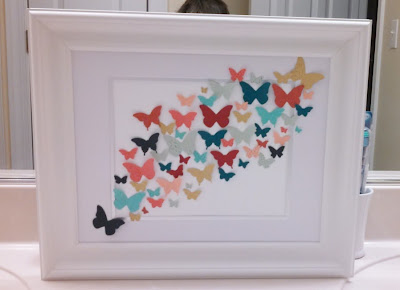 This was Stamp Club week and my gals were dropping like flies!  I usually have 7-8 gals on Tuesday and on Thursday.  But Tuesday, I ended up with 6 after Marianne had to stay at work for a meeting and Thursday I ended up with 3!!  I had a couple of gals out sick, one out of town and one of my Thursday gals came on Tuesday instead and my Tuesday gal came on Thursday!  But the three that were here on Thursday really liked the intimate setting.  They said they didn't feel as rushed and were able to chat and visit while creating.  So, it all worked out.  We made some great cards I want to share with you. 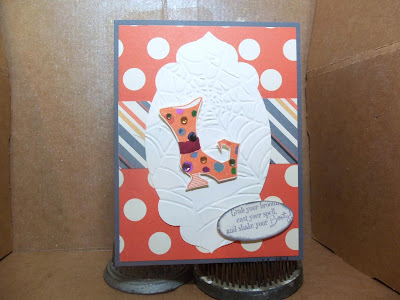 This is our Halloween card.  I used the Howlstooth ... DSP from the holiday mini.  I gave the gals the option of embossing the Apothecary Arts die with the Spider Web folder or stamping directly on the die piece without embossing.  I think everyone chose to emboss and thus had to stamp the boot (from Bootiful Occasions) out separately.  When they complained about cutting, I reminded them they had a choice! 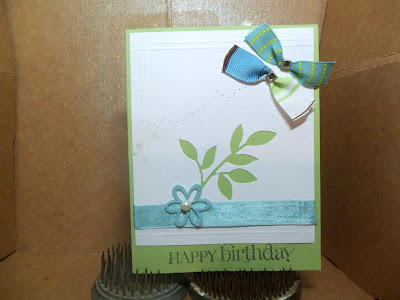 This was a fun card to make and is inspired by a card I saw on Pininterest.  It is a good way to use up those scraps of ribbon you have stuck in a jar somewhere.  We stamped the sentiment onto Certainly Celery first to make sure we had room for everything else.  It's hard to see from the picture, but we embossed all around the edges of the white piece with the Scorer.  The Little Leaves die is cut from the middle of the card.  I used some retired felt flowers with a pearl on top of the Baja Breeze ribbon.  The ribbon butterflies are gathered in the center with rhinestone brads (that I didn't realize had retired until today!!). 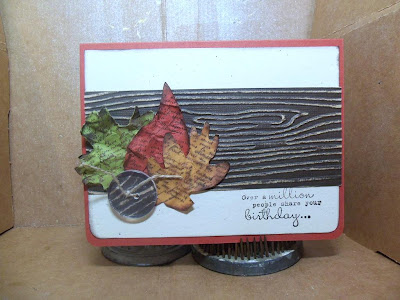 I think this card is my favorite.   I used the new Core'dinations cardstock from the Holiday Mini and sanded it so the white core would show. 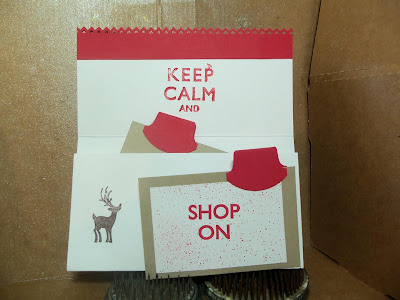 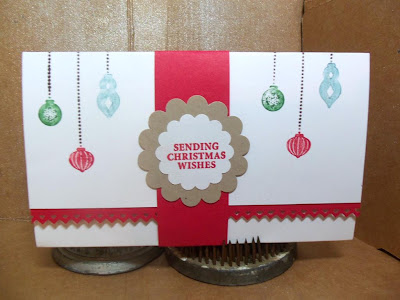 This is a gift card holder that has an envelope inside for pockets.