Memo: Good Recipes for you

Well, another good weekend is in the books (except for football!).  Friday, Sonny and I went to the movies to see Trouble With the Curve with Clint Eastwood.  That man just gets better with age.  I love him.  The movie was very good I thought even though I have heard it is not doing great at the box office.  It's much better than some of the sci fi junk that seems to be showing all the time.

Saturday I had planned to go into town to visit my friends at Stampers Alley but just never got motivated enough.  Instead I worked on several projects at home and got a few things finished which I'll be sharing later in the week.  One of the projects is a memo board that I bought at a craft store in Greensboro in July.  I really like how it turned out and now need to get a sawtooth hanger for the back so I can hang it in my kitchen. 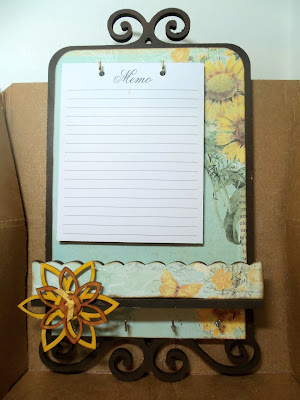 I painted the wood a dark brown and used some DSP that I had bought at the scrapbook store when I bought the memo board and glued it down.  I really like those sunflowers so I decided to put the memo pad to one side so you could see the flowers.  I glued the wooden flowers to the front after painting them with Copics. 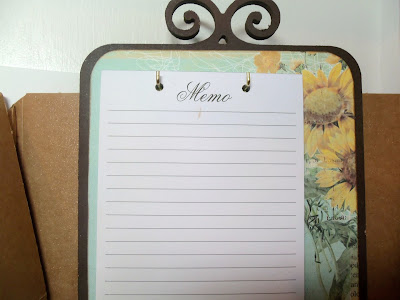 Sunday we went to Big Al's to watch football but it wasn't such a great day.  Not only did my Steelers lose in the last few seconds but not many of my picks in the football pool did well either.  I think I had 7 wins and 8 losses.  Just have to hope Green Bay wins Monday night to make it even 8-8!

I have been pinning a bunch of stuff on Pininterest since I discovered it but hardly ever go back and really do anything with my pins.  So last week when I made my grocery list out, I included several recipes that I had pinned.  Saturday night I made pepperoni rolls and they were delicious!  If you are interested, click HERE for the recipe.  I thought they were as good as any I've had in Pittsburgh.  Next time though I will add more cheese.  Sonny came in the kitchen while I was making them and thought he'd help and he put the cheese on - I would have put it on more heavily.  But when he wants to help with cooking, I'm not one to criticize or turn him down, know what I mean?  I also made a yummy French Dip sandwich one night.  If you are interested, check it out HERE.
I love comments! Sharon at 9/24/2012 No comments: Links to this post

Email ThisBlogThis!Share to TwitterShare to FacebookShare to Pinterest
Labels: Memo Board, Recipes / Cooking