I am still playing with the soon to be retired stamps.  This octopus from Sea Street is just so stinkin' cute!  I stamped him in Cucumber Crush (a color I really haven't used much).  I stamped the balloons and cut them out - drawing in the strings.  The little cupcake and the balloons are from Party Wishes - a great stamp set from the Occasions Catalog that will be retiring also.  Another retiring item that I will really miss is the Washi Label Punch.  It was just the right size for some of the sentiments. 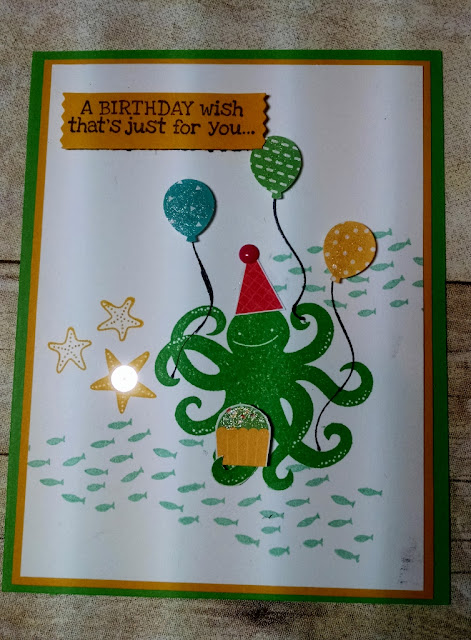 I don't have any sneak previews for you .... yet!  My order is supposed to be come on Wednesday. As demonstrators, we are allowed to pre-order a select few stamp sets and accessories.  I have only ordered the InColor stuff - paper, reinkers and stamp sets.  I decided to save my money and order products that are on my wish list from the new catalog along with everyone else in June.  I think this is the first time I haven't ordered a stamp set from the pre-order sets!

I hope you had a nice Mothers Day.  Ours was pretty low key.  Ashley called me after church to wish me Happy Mother's Day.  She had taken me shopping at Chico's while I was with her last week in Texas.  We went over to Marianne's house around 1 pm and played cards with mom and had dinner.  We decided on Mexican - Marianne made tacos and beans; I made a Mexican quiche, fresh salsa and guacamole and Angela did strawberry shortcake.  I think Mom enjoyed it.  Angela bought Mom, Marianne and I each a beautiful orchid.  I'm taking bets on how long Marianne's plant will last.  She did not inherit Mom's green thumb.  If anything, hers is black!  I'm hoping for good luck for mine!!

We had a bit of excitement in this area yesterday.  Sonny had gone up to the gas station to get gas for his boat when he heard that a section of I-150, our main road to and from Mooresville, was closed due to an armed gunman and a stand-off with the police.  Evidently the incident started about 4:30 a.m. and the highway was not opened back up until around noon.  I think it started as a domestic situation and the police ended up shooting out his tires.  Here is an article about the incident.  We waited until hearing that the road was clear before going to Marianne's.
I love comments! Sharon at 5/10/2016 1 comment: Links to this post

This is another one of the cards we made at Stamp Club this week.  It was so easy but looks so good. 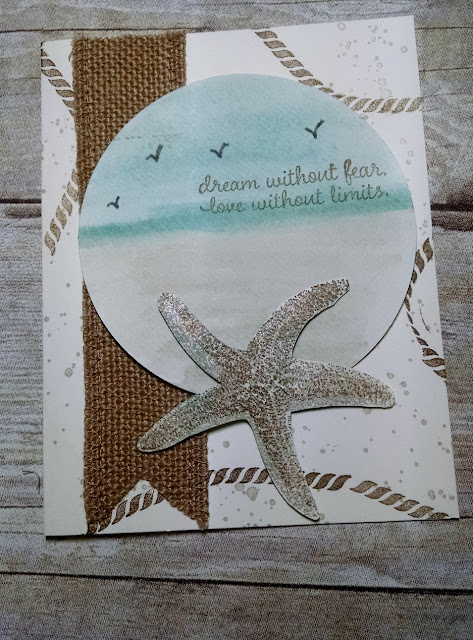 The circle is watercolor paper.  I just used my Aqua Painter and ink that I squeezed into the lid.  I painted the bottom with Sahara Sand which I then stamped Gorgeous Grunge lightly.  The top is painted with Soft Sky with Lost Lagoon painted across the horizon.  The secret is not to think about it - just load your Aqua Brush with water and ink and swish it across the paper.  The rope image is from Sea Street.  I curved the stamp on the acrylic block.  Use Gorgeous Grunge all over the Vanilla card and glued a piece of burlap ribbon down one side.  On scrap vanilla card stock, I stamped the starfish from Picture Perfect (love this stamp!), cut it out and then went over it with Wink of Stella before adhering it to the circle with dimensionals.  The birds are done by hand (just make a check mark!)
While I was working on the cards, I was standing up to stamp and bent over my work table.  Sammie jumped up on my back and peered over my shoulder to make sure I was stamping straight!  I had my phone right beside me so was able to get a picture! 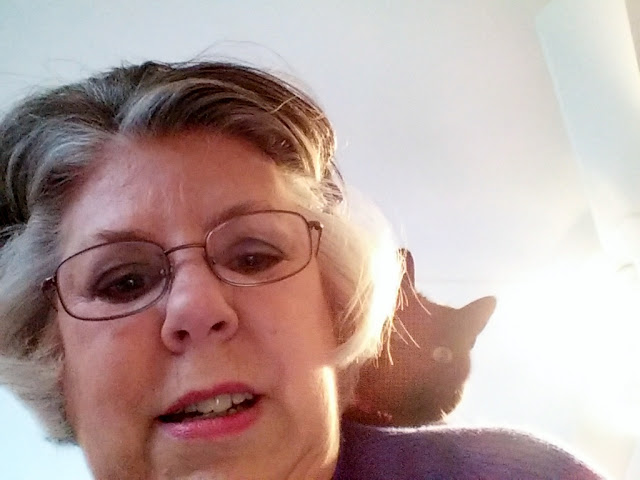 I have Stamp Club tomorrow and we are going to do things a bit different this month.  We are all going to make two cards together to learn a couple of techniques.  The first one is a spinner card using the "two pennies" to make the slider.  It has been years since I made one of these cards but in the past month, I have made several.  I thought I would demonstrate it for the girls. 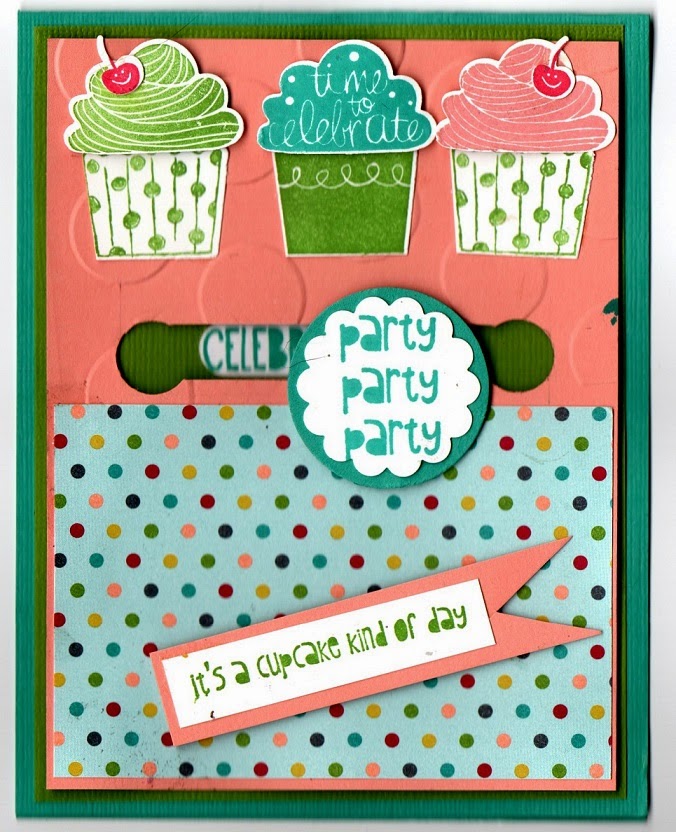 This card also uses a new stamp set from the 2014-15 catalog - Cupcake Party as well as a new embossing folder, Large Polka Dot.  These are such fun cards to make! 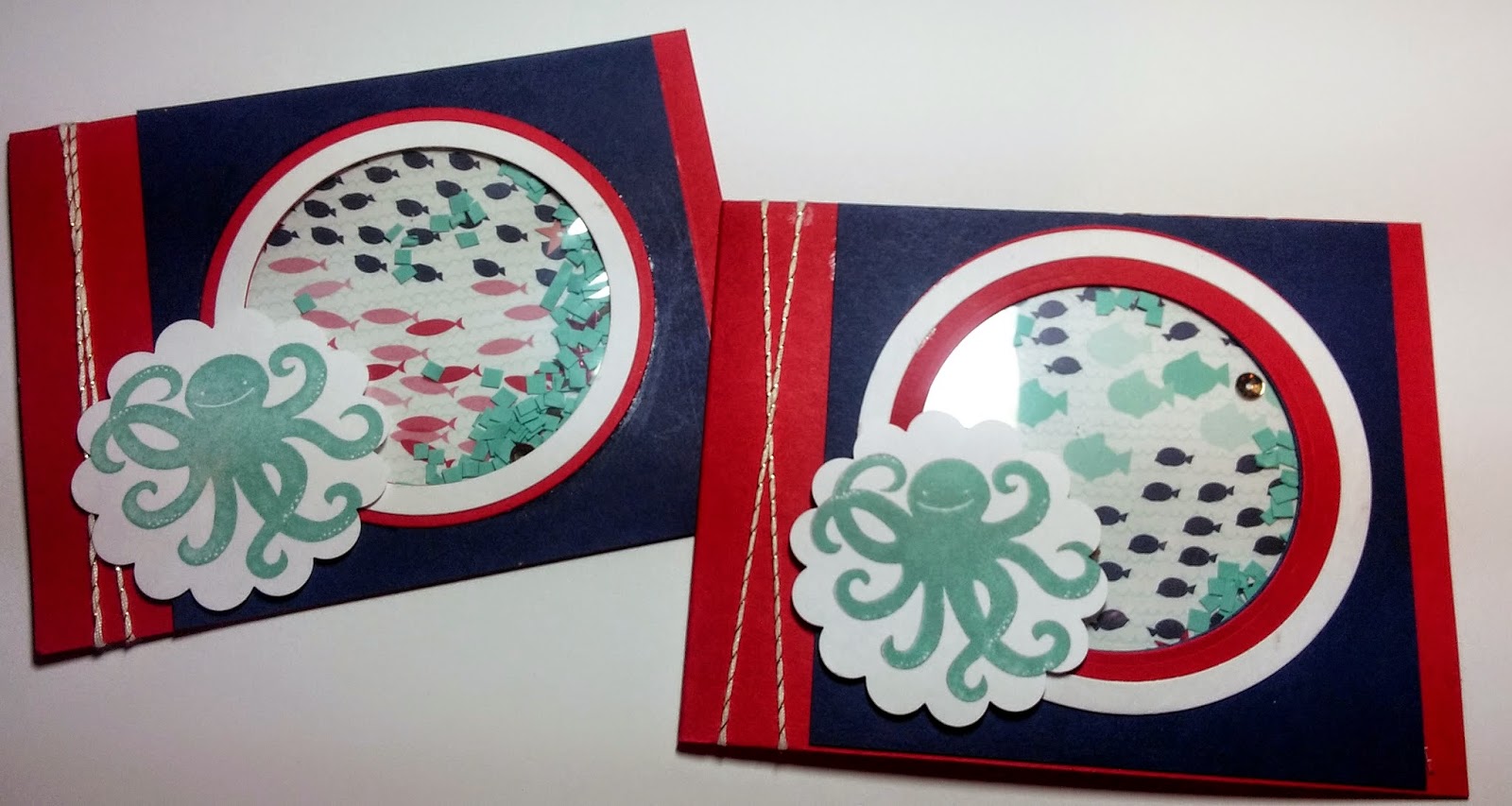 I used a cello bag to make the pocket for the shaker stuff.  The background is a piece of the Maritime DSP.  Another fun card!

After doing these cards, I am going to let them do a couple of card creations using Work of Art.  I got carried away and made about nine different cards using the set.  I couldn't pick just one or two for them to make so I decided to let them choose their own.  I shared a few of the choices in THIS POST.  Here are a few others:

I purchased this cute stamp set during the new catalog pre-order called Sea Street.  I really like it except for one thing .... I don't want to cut the octopus out by hand!  I don't mind "fussy-cutting" most of the time, but this little guy got the best of me!  But luckily, he fits real well into our 2 1/2" punch.

This is the card I made using some of the new In Colors - Hello Honey (card stock) and Mossy Meadow (octopus and arrows) and Sea Street.  It also uses the Circle Thinlits but just a bit differently.

Here is the front view of the card: 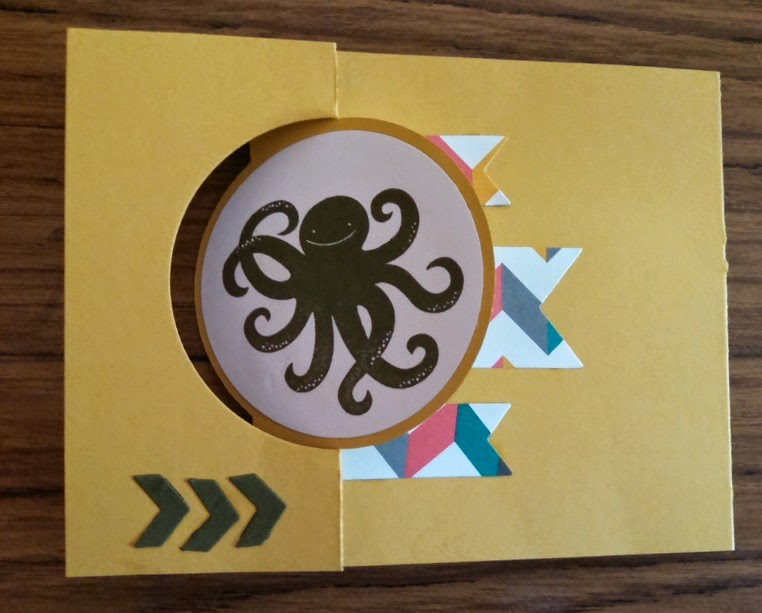 And look at the inside: 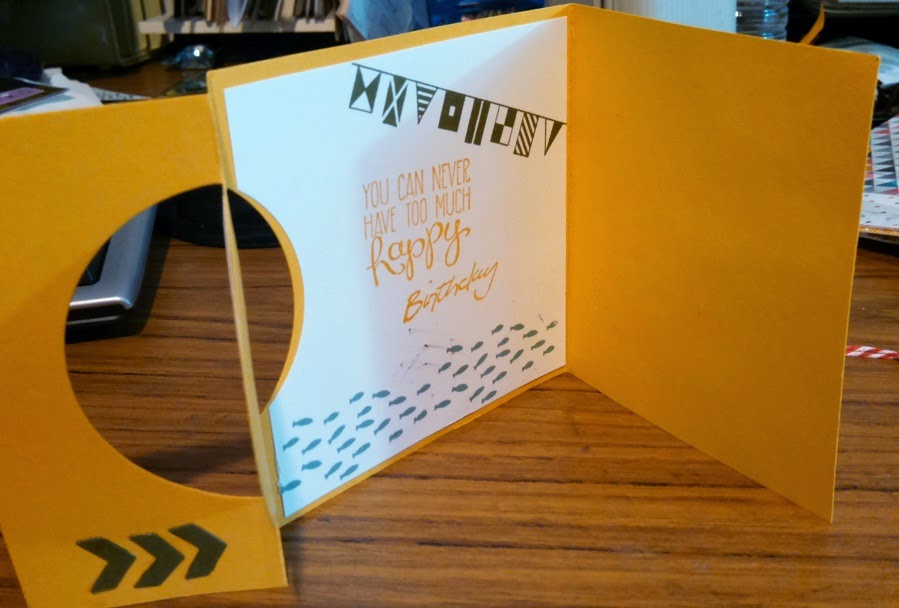 I have the step-by-step "how to" pictures for you: 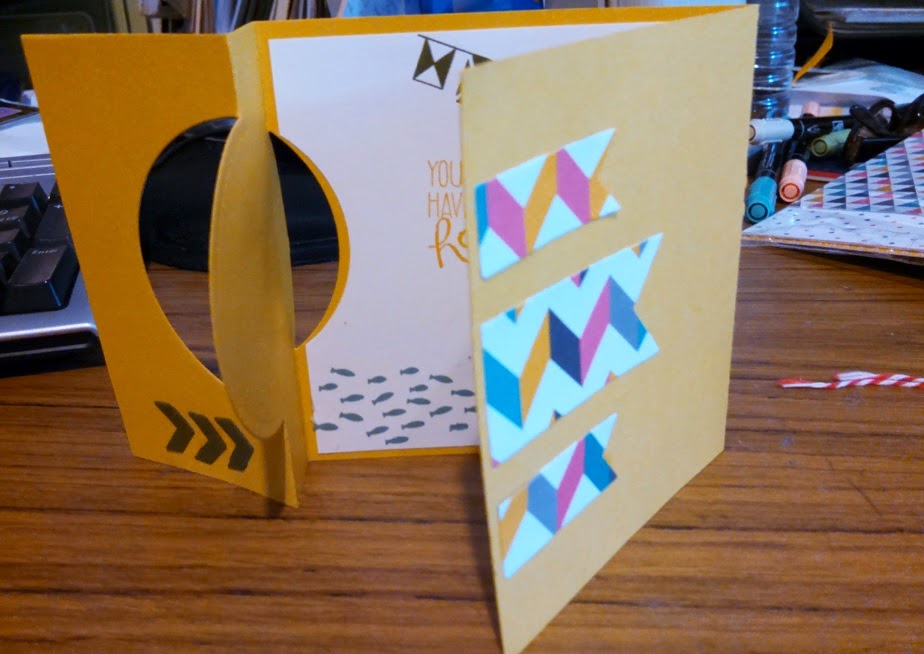