I'm back from my trip and experiencing major jet lag!!  We got back Saturday night.  We flew from London to Detroit with an hour to go through Immigration and Customs.  Then boarded the plane (with 10 minutes to spare!) to Charlotte.  We were supposed to arrive in Charlotte around 7 pm but when we got close, there were severe storms in the area and the pilot announced he was going into a holding pattern for about 30 minutes to wait it out.  The airport ended up closing because of the storms and we headed to Columbia, SC for refueling and to wait out the storms.  We ended up staying in SC for about 3 hours and getting to Charlotte around 11 pm!  My sisters and mom spent several hours waiting for us at the airport - wasn't that sweet of them??!!  By the time we got our luggage, drove home and got in the bed, we were 1/2 hour short of being up 24 hours!!  To top it off, I also picked up a sore throat in the last few days.  I think it is mostly allergies and sinus problems - I start off the day feeling bad but as the day progresses I'm ok.  I haven't had the energy or inclination to go to the grocery store since getting home and our cupboards are looking pretty bare!  Tomorrow Sonny is taking my car and I am staying home waiting for the cable man.  The water pump went out on his truck today and our DVR cable box died while we were gone.  So, guess the groceries willl have to wait another day or two!
I am working on some projects for the SU NC Quarterly meeting this weekend in Fayetteville and I will be sharing them with you soon I promise!!
In the meantime, here are a few pictures from our trip.

Changing of the Guard

Just a quick post before we head out this morning. Yesterday we headed out bright and early and caught the underground Tube to Buckingham Palace. We took a leisurly stroll through St James Park snapping photos of the geese, swans, ducks and flowers. It was quite lovely. We wandered around the area outside Buckingham Palace where loads of people were "que-ing" up to watch the changing of the guard. We walked over to the Guard Barracks area where the Guards were in the courtyard being inspected and practicing their instruments. Our guide yesterday had advised us where to stand in order to get the best view of the ceremony. And he was right. We got a close look at the Guard as they were marching to Buckingham Palace. I could reach out and touch them! 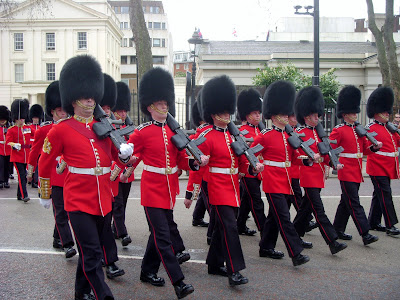 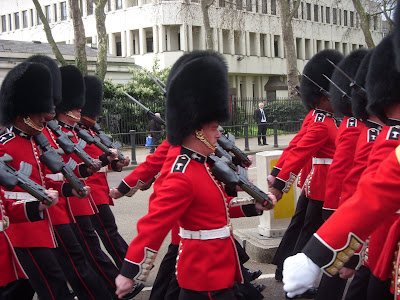 After that experience, we walked over to the Churchill War Museum. We did an audio tour there and it was very impressive. I am not big on war and that kind of stuff but it was really a good museum. You could experience the bombing of London during WW II as well as listen to Churchill's speeches. The museum is actually in the shelter that Churchill and his staff used during the war.

Last night we took a Jack the Ripper tour and was quite spooky! But it was fascinating. Our guide was definately a Jack the Ripper expert and a great story teller. I was afraid I would have nightmares last night.

The weather has been good so far - no rain although I think we may have some today. It has been cool and windy. Yesterday was the coldest day we had and we ended up having to come back to the hotel for our jackets and a brief rest.

Well, gotta run and get ready for today's activities - Westminster Abbey.
I love comments! Sharon at 4/05/2011 No comments: Links to this post

The Tower of London

We had a full day today. Started out this morning with a panoramic overall view of London with our own personal tour guide. It was a good way to see a lot in a comfy car and then decide what we have time to see and do the rest of the time we are here. We started out in Hyde Park and drove by Buckingham Palace, Westminister Abbey, Houses of Parliament, Trafalgar Square, Picadilly, the US Embassy, many museums and statues of famous Brits, over the London Bridge, through an area where Harry Potter was filmed and on and on!! We stopped off and watched the Changing of the Horse Guard which was very impressive. Tomorrow we will go to Buckingham Palace to see the Changing of the Guard. After our 3 hour tour, we were dropped off at the Tower of London. We grabbed a bite to eat before heading into the Tower. We were able to get in free as guests of one of the Beefeaters there so we felt pretty special. This was arranged for us through our Brit / Texas friends!! We took an hour guided tour and then wandered around on our own. The most impressive thing for me was to view the Crown Jewels. Here all the crowns, orbs and scepters from the various royal ceremonies are on display and are really something spectatular! We saw Queen Victoria's diamond crown as well as the crown of the Queen Mother who died in 2002. We also saw the scaffolding site where enemies of the crown were beheaded and heard a lot of gruesome tales of traiters and killings. The Beefeaters loved telling those tales. 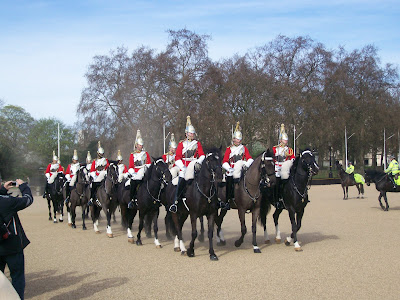 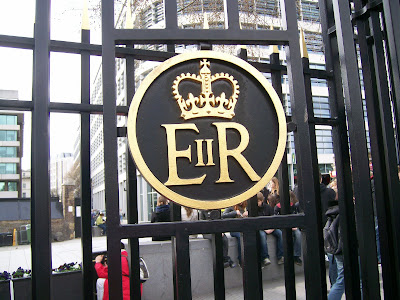 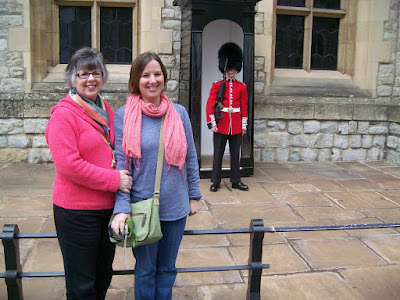 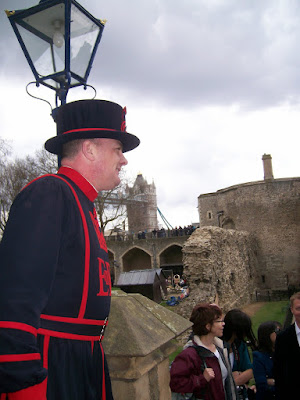 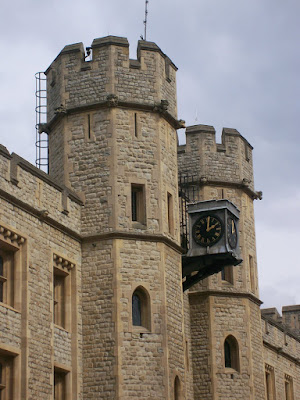 We arrived by the train today in London and have just returned to our rooms for the night. We got here around dinner time and walked over to the Kensington Palace area which was the residence of Princess Di. The palace is undergoing construction so we were unable to get close to it but the garden and park area was beautiful. Tomorrow we are meeting our tour guide early and taking a panoramic view tour of the city. I'm excited!

Here are a few pictures that I have taken along the way. 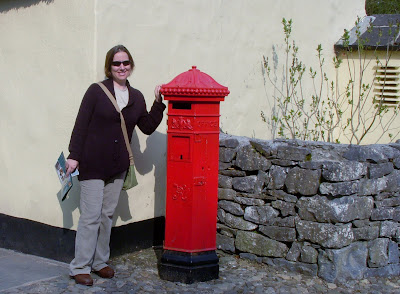 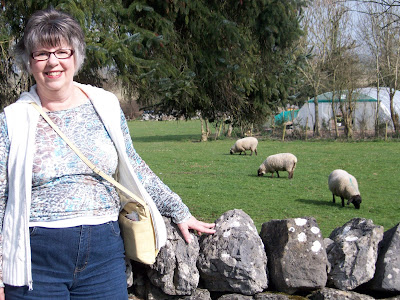 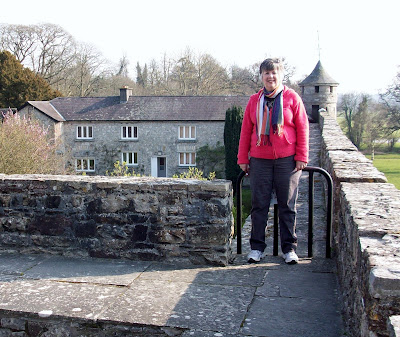 England!
We arrived in Nottingham, England last evening. Nottingham is the home of Robin Hood and Sherwood Forest. It is sooo much different than the towns we saw in Ireland. Nottingham is a pretty big city. We walked around last night and found an old pub for dinner called Old Salutation. It was built in the 13th century! There were 2 Englishmen sitting beside us that we got into a discussion with. One of them was very opinionated about us Americans. They did not agree that we have the death penalty in the US. It turned into a heated discussion as we tried to explain how long it took to actually execute someone and how long we had to pay for them in prison if they were not executed. But there are not near the number of pubs here like there were in Ireland. We can probably go a few blocks before we find a pub instead of a few store fronts!

Today we walked over to the City Centre area and visited St. Mary's Church of England which is where the Sheriff of Nottingham captured Robin Hood. It was a beautiful historic church. After that, we took a tour of the Crime and Punishment Museum where we visited the jail that Robin Hood could have been locked up in. The tour took us through three centuries of crime, punishment and law. We visited a Victorian courtroom, an 1800 prison, the prisoner's exercise yard, a prison from 1833, and a woman's prison facility. In the courtroom, they took people from our tour group to re-enact a trial. Our Ashley played the judge!! There were costumed interpreters that really brought the whole experience to life, showing you exactly how the law has developed over the years. The entire approach is hands-on. In the courtroom, they took people from the tour group to re-enact a trial. Ashley played the judge! After lunch, we walked over to the oldest bar (1189) Trip to Old Jerusalem. Isn't that just hard to believe!!

Tomorrow we are meeting our friend, Margaret's parents and sister for lunch. Then we will be boarding the train for London. Hopefully, I will hav efree internet connection in the London hotel - I am paying for an hour here in Nottingham.