Saturday night my cousins had a birthday party for their mom who turned 80 on Friday.  They told her they were going to celebrate her birthday on Saturday but it would just be the family.  Her daughter drove up from Raleigh and her son came up from Charlotte to celebrate at Candy's home.  So, she was really surprised when my mom, sisters, brother, Sonny and I showed up.  I wish I had remembered to take my camera to take some family pictures.  It's hard to think up presents for 80 year old ladies!!  But I decided everyone needs cards!  So, I made a few cards and a card box to put them in for her gift and it was a big hit.
I used a 6x6 paper pad from SEI that I got at CK last summer for all the cards and the box.  Stamps used are all SU. 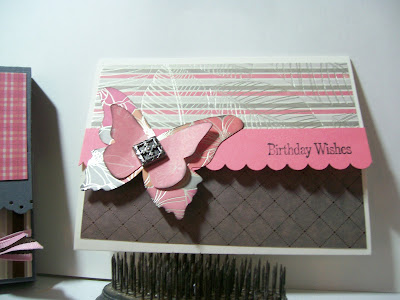 Card #1 - I used the Sizzix Butterfly Die with a brad in the center. 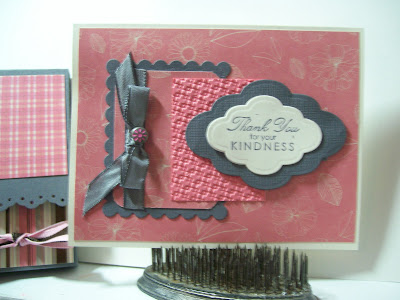 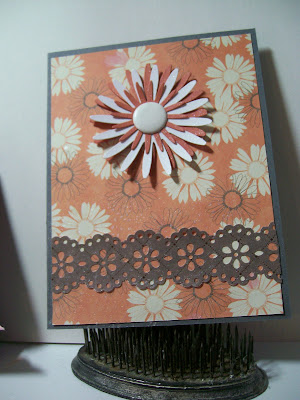 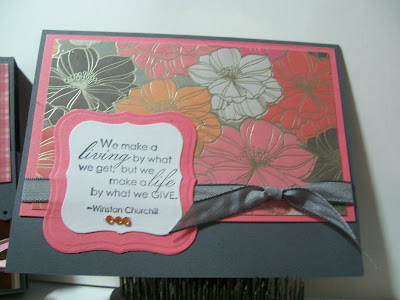 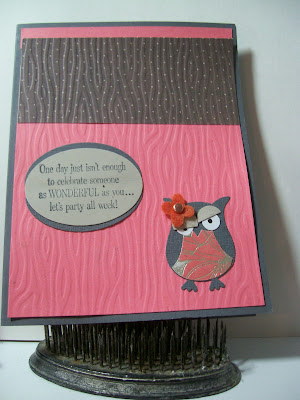 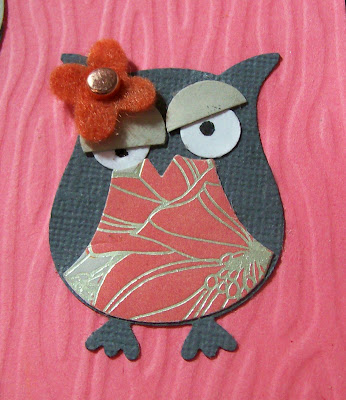 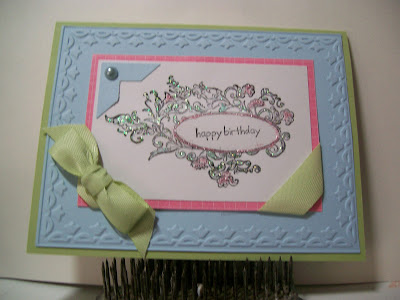 This is the birthday card I made for Aunt Carol - a CASE from last month's Monday Mailer!
I love comments! Sharon at 3/14/2011 2 comments: Links to this post

Whew!  I'm done with the Craft Fair!  It went pretty well.  I sold some things but brought some things back home with me too.  It's funny - you just never know what people are looking for.  The items I thought would have been the big sale items weren't.   Oh well .... I have quite a few Christmas gifts now!   I'm just ready to make cards and other things for fun now - starting tomorrow!  After the show was over, I went to lunch with a group of ladies, had a couple of margaritas and relaxed.  Tomorrow I'll tackle the unpacking and maybe make a start on getting my craft room back in some kind of order!  Yesterday, you couldn't even walk in my room without stepping on something.

I thought I'd share a few pictures of some of the things I had for sale today.


I am going to Statesville tomorrow evening to a Christmas Open House at a nursery/gardens there.  Please keep your fingers crossed that it won't be rainy!!  I know it will be cold but I can dress warmly.  We finally got out the down comforter last night and slept under it all snuggly and warm!   Sonny broke down today and had to turn the heat on while I was gone this afternoon.  Let me tell you, if he turns the heat on, you know it's cold in the house!  He said he'd been outside doing something and when he came inside, he realized it was much colder inside than outside.  He checked the thermostat and it was registering 58 degrees!  (Ashley - you would have icicles hanging off your nose!)  So .... I am headed to bed now to get under that warm down comforter!
Good night.
I love comments! Sharon at 11/03/2010 1 comment: Links to this post

Wow!  I had a busy day yesterday.  I was up pretty early (for me!) and headed to the Soup Kitchen to help prepare meals for those less fortunate.  It always makes me feel good to do that.  Somehow, I have gotten to be the "go-to gal" for meal preparations when I am there.  Jan, the head of our group is one of those cooks that is not very adventurous and follows a recipe to the "T".  I have convinced her it is ok to add a little of this and a little of that to make a recipe your own.  Today the dish that was chosen to prepare was a Hamburger Casserole.  They got it out of a book the Girl Scouts put together for a badge and presented to the Soup Kitchen.  The recipe called for mixing hamburger meat (already cooked) with Cream of Celery & Cheddar Cheese soups and  mixed veggies (ugh).  You also mix up Bisquick into a dough and put on the bottom of the casserole and then spread cheese over the top.  Well, we decided that sounded pretty bland.  So, I found a few green peppers and scallions that someone had donated and we chopped those up and added them.  The gals who were preparing it decided to put the biscuit mix on top instead of on the bottom.  Sounded good at the time!  Luckily, we fixed one pan first as a test model without the biscuit mix - we were going to add it after cooking the dish for a while.  Well, after about 20 minutes we took the pan out of the oven and it was really soupy!  I think the biscuit mix is supposed to absorb some of the liquid of the dish.   We already had 4-5 pans made up and ready to go in the oven (without the biscuit mix).  So, we got another pan and put the biscuit mix on the bottom and dumped the casserole on top.  That came out much better!  It tasted ok to me - probably not something I will make and serve at home but the patrons of the Soup Kitchen loved it and many came back for seconds and requested to take a plate home with them for dinner.  So, that is what counts!  We served about 100 people today.
After Soup Kitchen duty, I headed over to a Board Meeting that lasted way too long!  We had a lot to discuss with our big Horse Racing Fund Raiser coming up in early June.  Unfortunately, it is on June 8 which is when I will be returning from Texas so I will not be able to attend.  From the Board meeting, I met Sonny at Red Eye Bar and Grill in Mooresville for a late lunch/early dinner.  We had a couple of beers, some food and played a little trivia.
I have not shared publicly the news that my daughter is being deployed to Iraq - probably because I don't want to believe it is real until I have to.  We have known that it was probably going to happen for a couple of months now.  Well, this week, she finally got some specifics on the deployment.  As it stands now, she will be deploying with a unit out of Fort Hood.  She reports to them in mid-August for a mid-September deployment and will probably be gone 8-9 months.  She is scheduled for training at Fort Polk in Louisiana in June just after my mom and I leave her in Texas.   Although she is an Infectious Disease Pediatrition, she will act as a Brigade Surgeon with her unit.  I told her that sounded pretty impressive to me.  She told me she will be basically the unit's doc - treating the soldiers in her unit if they are sick or wounded.  Although if the injuries are severe, they will be sent to a CASH (which is today's equivalent to MASH.)  We hope that she will be able to spend a couple of weeks with us in July.   Several people have requested her address when   she is deployed.  When I know, I will let you know.  I will miss her terribly, but I am so proud of her and of her commitment.
Here more of the raffle prizes I made for my Newcomers's Horse Race Game Night.  I gave the items to the chairman today and the ladies really "oohed and aahed" over them.  Made me feel good! 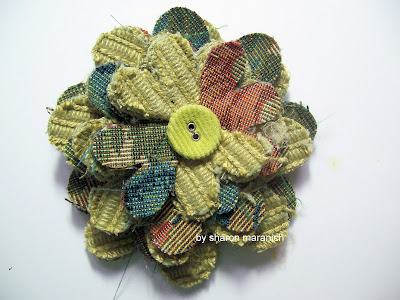 This is a Flower Brooch that I made out of upholstery material with the Kiwi Kiss button in the center. 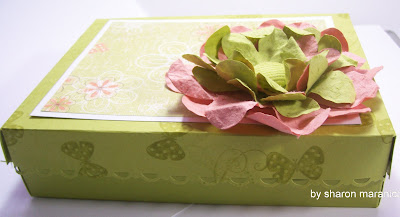 This is a box I made that holds cards.  I stamped the box with the butterfly from Flight of the Butterfly and the swirl in Priceless.  I scalloped the edges. 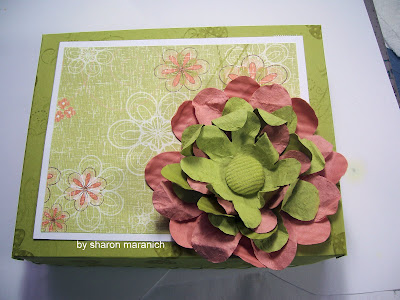 This is the top of the box - I just love the flower!  It matched the paper great. 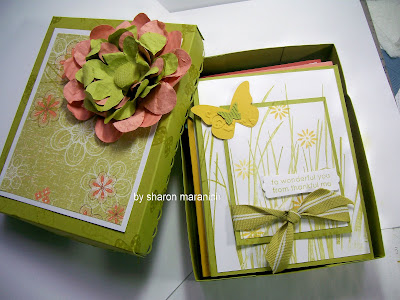 The cards ar all made using Inspired by Nature and the Embosslet Butterly. 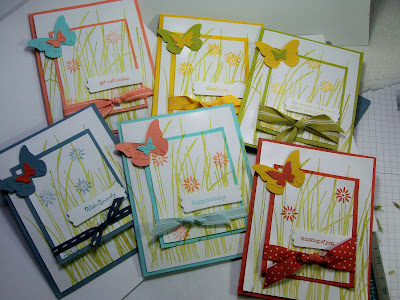 I had a nice and relaxing Mother's Day.  I didn't even get dressed until after lunchtime!  It was so nice to just be lazy and do whatever I wanted to do!  Sonny offered to take me to the movies or anywhere else I wanted to go but I told him I was ok to just get caught up on some things in my craft room.  I made the cutest Top Note Purse and cards to go in it.  My Newcomer's group is having a Horse Racing Game Night in June for a money making project.  I always donate items to them for the event. 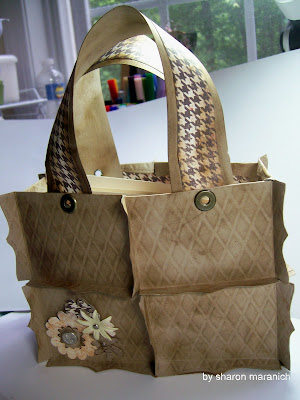 Isn't this the cutest?  I found this pattern through a search on Splitcoast.  I used Kraft paper and the Top Note die.  The handles and lining are some retired Designer Paper.  It reminds me of the Rag Purses that my sister makes.  I am putting the following cards with envelopes in the tote. 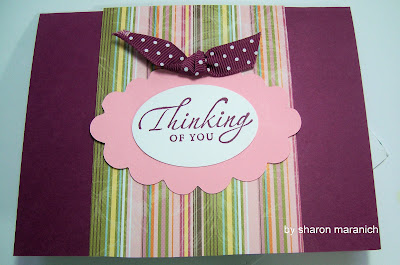 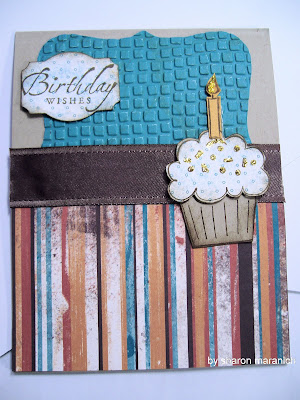 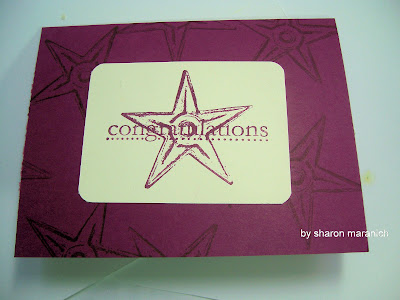 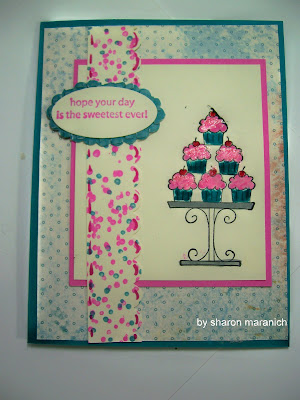 I made a card box a couple of months ago with some cards from Fifth Avenue Floral.  I've just realized I did not share them with you!  What was I thinking???  I used the set for a hostess gift.  I enjoy making a gift set of cards and a box to give away.  It always impresses the recipient. 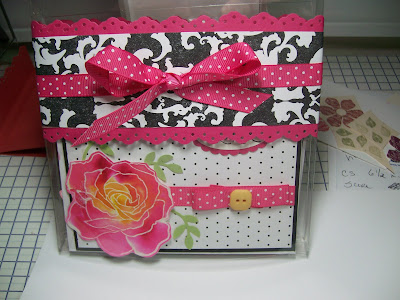 This is the acetate box I made to hold the cards.  I used the paper from Night and Day DSP. 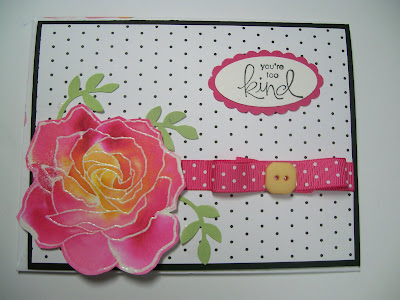 The roses are the watercolored roses.  You spritz the Shimery White Paper with water and use your Aqua Painter with reinkers. 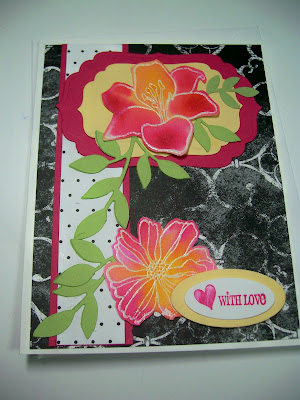 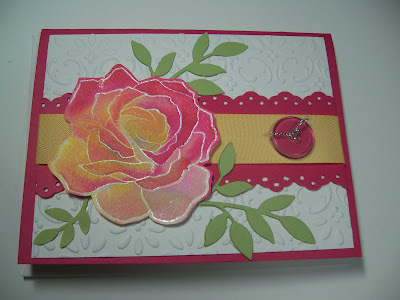