Petite Petals Card in a Box

I made another fun Card in a Box.  This time I used my Fringe Scissors to make grass for the flowers inside the box.  I am loving those Fringe Scissors.  Obviously, a lot of people like those scissors and ordered them so much that they are now in back order for the second time.  This time though they are not due in until March 31!!  Marianne is waiting for hers so I lent her mine for a while.  She is going to make the wreath that is in the Occasions Catalog.  I will get her to send me a picture and share it with you when she finishes it. 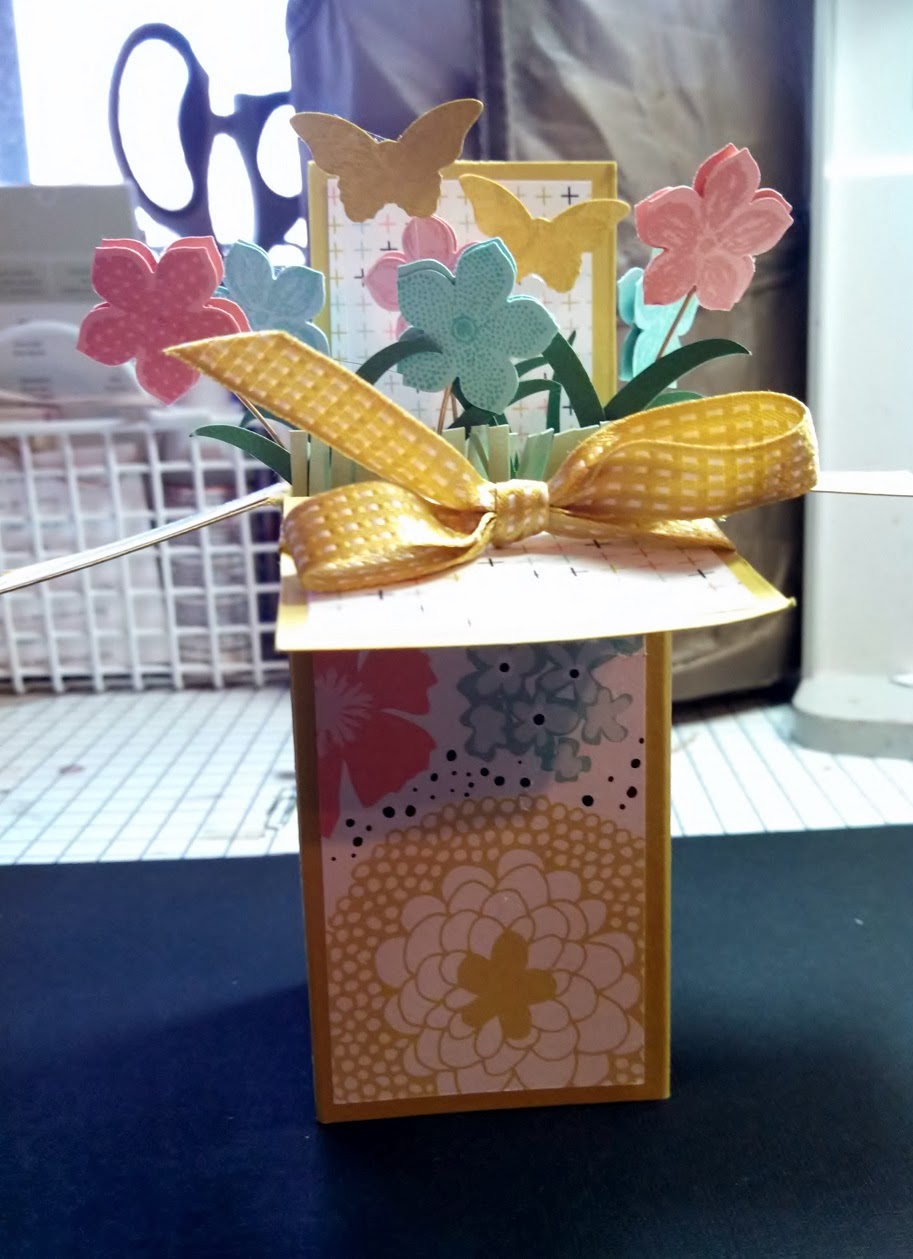 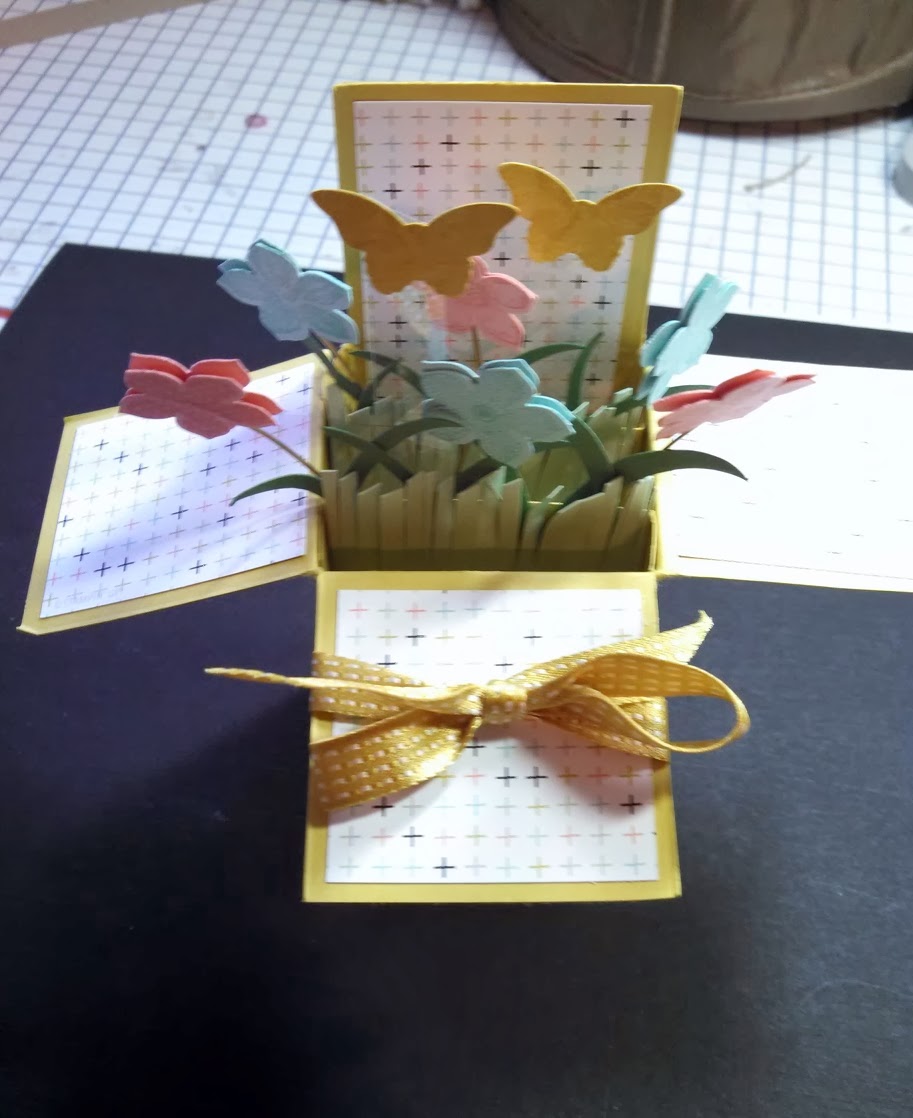 I used the Petite Petals stamp and punch for the flowers.  I punched stamped and punched each one twice and inserted a thin piece of wire in between them using glue dots to adhere them together.  I used the small butterfly punch for the butterflies and adhered a small strip of a transparency behind them.  There are two rows of flowers, butterflies and grass.

I played bridge today and we have a new venue for playing.  We normally play in each others homes but a couple of the ladies have problems with their health or their husband's health which makes it difficult sometimes for them to host the group of eight.  So I came up with the idea of playing at a restaurant.  It worked great!  We met at the NY Bagel and Deli Restaurant in Mooresville which was centrally located for all of us and had a varied menu plus a gluten-free menu for one of our members who cannot eat gluten food.

We are having crazy weather!!  Yesterday it was almost 70 degrees and beautiful.  This morning when I left for bridge, it wasn't bad - in the 50s I think.  When I finished playing bridge, the wind was blowing like crazy and the temps had dropped to the 30s!  Brrrr!!! Marianne and I were supposed to go to Concord tonight to stamp with Allison's group but it was called off because of the threat of freezing precipitation.  We are supposed to have a low of 19 degrees tonight.  Sonny is going to have to get his "long johns" out to go skeet shooting tomorrow!!   The high is predicted for 43!

I have a few Sammi pictures to share!  When I was working in my room tonight, she climbed up on the tallest shelves that I have and nestled herself in my box of chipboard. 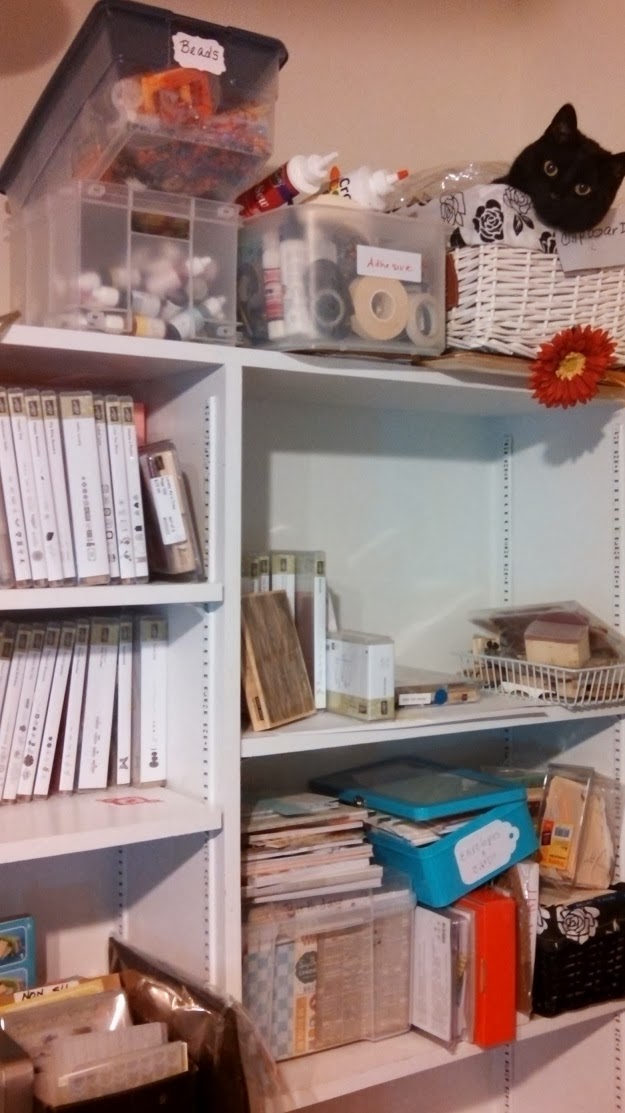 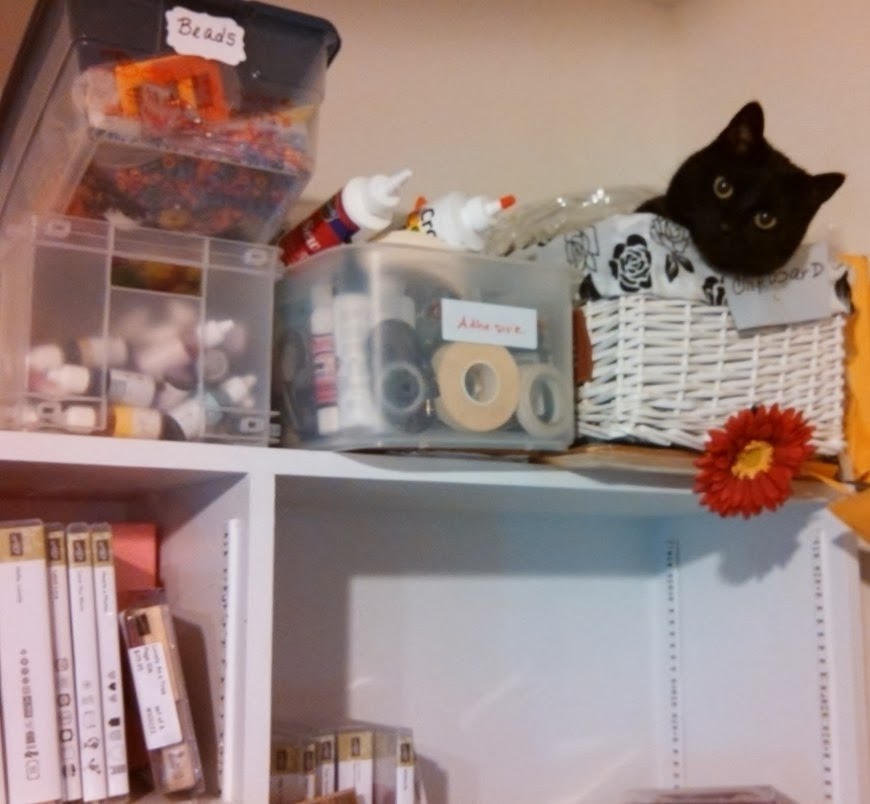 Email ThisBlogThis!Share to TwitterShare to FacebookShare to Pinterest
Labels: Card in a Box, Petite Petals, Sammie

Card In a Box

As promised, here is the Card in a Box instructions.  There are a lot of YouTube videos on the web but most of them use 12 x 12 card stock.  This one uses a piece of 4 1/4" x 11" card stock so you can two from one sheet of card stock.  They are a lot of fun to make and fold flat to fit into a regular envelope.