Did you do something fun for St Patrick's Day this year?  Mine was pretty quiet.  I played bridge and that was pretty much it.  I did put a corned beef brisket in the crockpot before I left this morning.  I bought some cabbage this afternoon and put some in with the beef.  I know that doesn't sound like a big deal but I don't eat cabbage!  Sonny only likes it raw - which sounds awful to me.  Many years ago, my friend, Margaret, made some cabbage for me and I actually liked hers.  I haven't had any since but I ate the cabbage I made tonight (with added butter, salt & pepper) and liked it.  Sonny wouldn't eat it - of course - but he is picky about everything!!  He ate his cabbage raw with Italian dressing on it.

I got a call back today from my doctor's office about my lab results and I have an infection - a UTI.  It is so weird because I have not had any of the usual symptoms that I have had before.  Oh well, at least it is nothing serious and with the antibiotic, I am on the road to recovery.

Sonny and I went to the movies yesterday.  It was cold and rainy and the theater was packed.  Guess a lot of people had the same idea of what to do on a cold rainy day.  We saw Non Stop.  It was really good.  We didn't find out who the bad guys were until pretty much the end of the movie and they weren't who we thought!  Very entertaining show.

I made this card a couple of weeks ago using a favorite retired stamp, Wild Rose.  Such a pretty two step stamp! 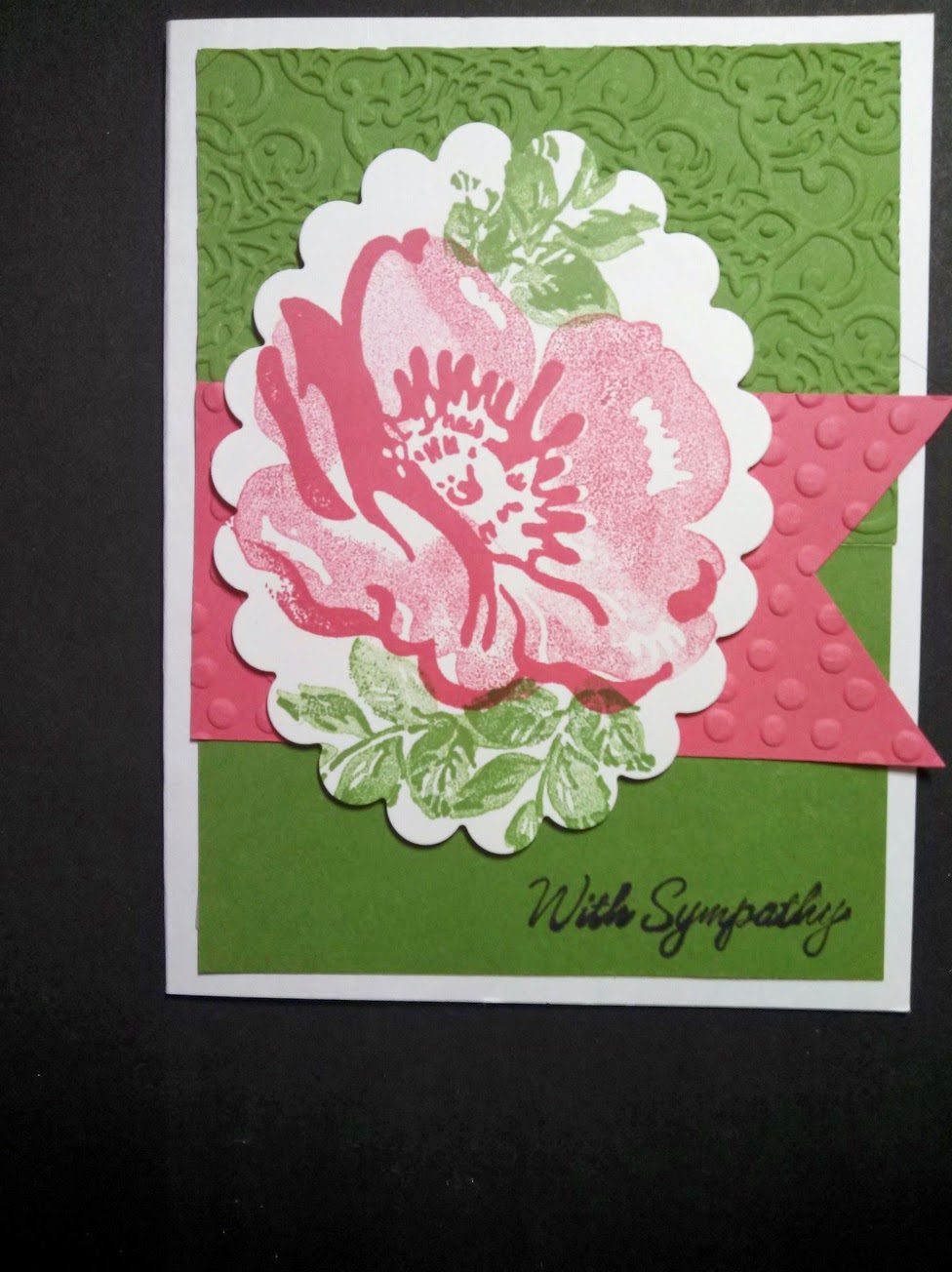 I used two of the In Colors - Gumball Green and Strawberry Slush and the Banner Framelit.

Do you ever lose things in your own home?  I have gotten so bad.  I was getting things together for Stamp Club this week and couldn't find one of the stamps that I needed.  I knew it had to be somewhere in my room since I had just used it Wednesday or Thursday to make the card sample.  I looked everywhere for about an hour - got down on my hands and knees looking under things; went through my stamps about 4 times; cleaned off both desks (which were a mess) and still no stamp.  I was starting to worry that it had fallen in the trash and we emptied the trash on Thursday.  So I decided to take a break and eat dinner and hopefully get a fresh view later that night.  When I went back upstairs, I started the search again with no luck.  I had to take some things into the attic which is accessible through the closet in my craft room and where I keep a lot of craft items that I don't use often.  Would you believe my stamp set was in there????!!  I guess I had it in my hand when I went in there to get something and laid it down.  That would have been the last place I would have looked!!  It's like having keys in your hand and going to the fridge to get the milk and putting your keys in the fridge!!  Oh well at least my desks got cleaned off!!
I love comments! Sharon at 3/17/2014 No comments: Links to this post