One of the projects we made at Late Night Stampers last week was a little Topiary Tree.  I just love it!  I think it would be so great to use for a baby shower or a bridal shower - using the colors of the bride (or baby).

The Designer Paper was cut into strips - we were told that she ran the paper through her shredder.  What a great idea!!  Then we curled the DSP with our bone folder and used a pin to stick them into the styrofoam ball.  There were a few flowers scattered around which were made using the Spiral Flower Die.

Wouldn't this look great done in fall colors for Thanksgiving or Christmas colors for December? 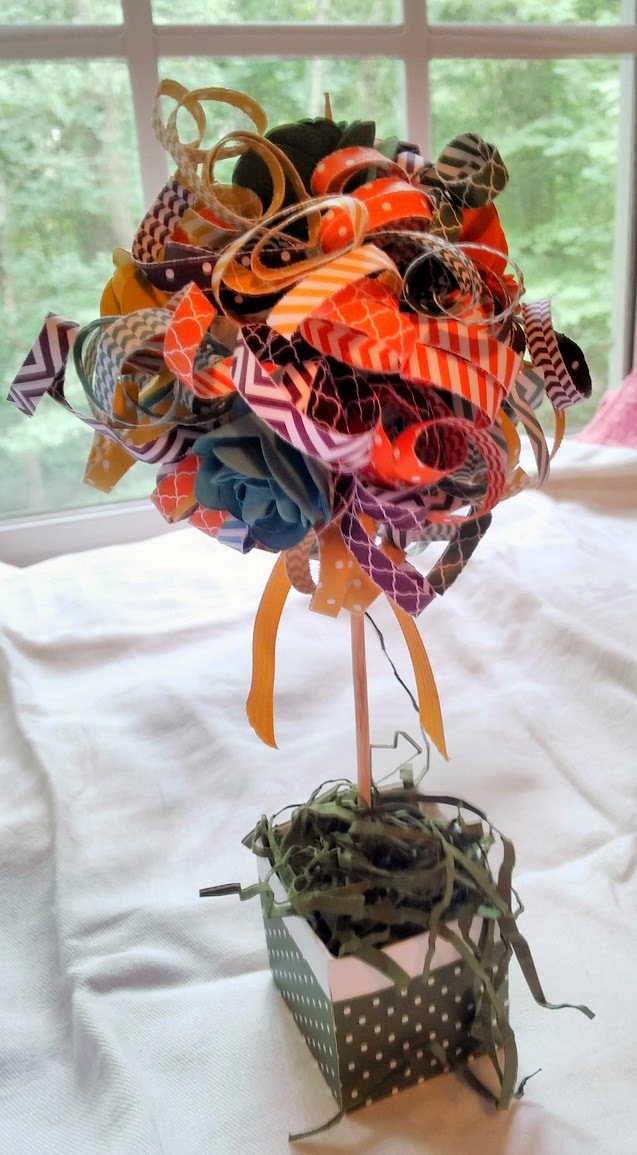 Marianne and I went to Salt Lake City several days before convention actually started. The Late Night Stampers group was hosting their Stamp Camp for the 13th year.  I had always heard about it but never attended.  Unfortunately, I think this will be the last year for it.  They booked a block of rooms for the event (and convention) at a discounted rate at the Radisson.  As of May 1 (their cancellation date), they had filled almost all of them but as it got closer to convention, people started canceling.  I think what happens is that demonstrators book several rooms early in the year hoping their friends and down-lines will want them. When that does not happen, they cancel with no cancellation penalty.  So,today we received an email that they were 150 short of the 80% of rooms to fill.  When we were in SLC, the head of the group was told she would have to pay $20,000+ to cover her contract.  I don't know what the total came to after all was said and done but I am sure it was a hefty amount.  I can't imagine coming home to tell my husband I have to cough up that much money!!  The event was a lot of fun and we were busy from 8:30 a.m. until about 7 p.m. at night for 3 days.  We started at 6 p.m. Sunday night with a welcome party where we each took a handmade gift to exchange.  Monday, Tuesday and Wednesday we were busy doing 3D shoebox items, different projects and  winning a bunch of stuff!!


Several times a day, we  got to go to the "Give-Away" table and pick an item for free.  Plus they drew names several times a day for a large prize give-away.  I won the flower Big Shot Die below on the final day!