Crazy weekend!   Guess everyone knows about all the tornadoes that were reported over the weekend.  Well, we had one touch down in Charlotte.  We didn't get anything at our house except a little rain but it was a different story in northeast Charlotte.  We got an early morning wake up call Saturday morning to see if we would be available later in the day to work at the Red Cross shelter that had been set up for the displaced residents.  The hurricane (oops - tornado) hit about 3 a.m. and did major damage to one neighborhood in Charlotte before moving on to Cabarrus County.  Charlotte bus service moved through the neighborhood collecting people to take them to the shelter.  I think they had about 40-50 people in the shelter.  By the time Sonny and I got there at 3:00 in the afternoon, there was only one family there and they left around 5:30.  So there was a lot of sitting around and doing nothing for a long time!  We were supposed to stay until 11 pm but at 9:00, Sonny and I had had enough and left!  I felt sorry for the volunteers who were coming in for the 11-7 shift and was glad it was not me!
Sunday Sonny and I went to the movies to see Act of Valor.  It was really good and the actors were actual Navy SEALS.  It was inspired by true events and was a powerful story about anti-terroism.  I can say without a doubt that I am glad my son or my husband did not want to be a SEAL after seeing this film!
I did have a little bit of time though over the weekend to make a few cards.  I made another starburst card ... I really love these cards!  I think we may do one at Stamp Club this month.  This one uses an old paper stach that I had in Pumpkin Pie.  I also used the Triple Treat single stamp that is available for FREE during Saleabration.  (You can also get it in the regular SU catalog.)  What I love about this stamp is that you can use punches to make it dimensional.  I stamped the flower in Not Quite Navy first and using the Fancy Flower Punch, punched it out.  Next I stamped it in Pumpkin Pie and punched out the next layer with the 5-Petal Flower Punch.  The inside circle could be punched with the 1/2" Circle Punch but i decided to use the Boho Blossom Punch and a Designer Brad for the center. 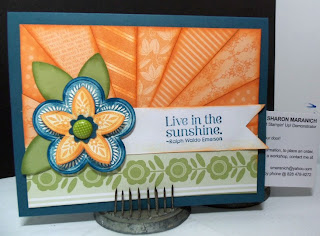