When we were in Hawaii this time, we took a flight over to the big island of Hawaii.  We were interested in seeing the volcano and the destruction left behind from the eruption.  Wow!  I didn't know what to expect but I know I don't ever want to live in an area near a volcano!  For sure, we didn't pack correctly for this part of our trip!  It was cold!!  Luckily we each had a jacket but none of us brought long pants.  Even Sonny was cold and that says it all!  The wind was the worse and blew right through us.  About the day we were leaving, it had gotten a little better and when we drove over to Kona on the other side of the island, it was much better!!

We stayed at the Kilauea Military Camp inside the Volcano National Park.  It was great - pretty rustic but suited our needs!  It was built in 1916 as a training ground for the National Guard and an Army vacation and health recruiting station.  At one time, General Dwight D. Eisenhower stayed here and during WWII, it served as a prisoner-of-war camp!  There was a restaurant with a small bar attached where we watched hula dancers one night and a bowling alley where we bowled one night as well as a fitness center, general store, post office, gas station and a game room where we hung out one night.  It reminded me of my days at Girl Scout camp! 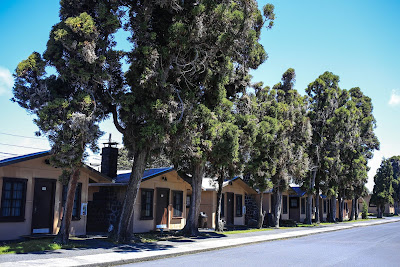 Most of the National Park was open and there were a few park rangers in the Visitor Center whom I'm guessing were working for free with the government shut-down.  We got maps from them and took a few hikes in the areas that were open.  There was no active lava flowing from the volcano when we were there.  We saw a lot of Steam Vents where the ground water has seeped down to the hot volcanic rocks and returns to the surface as steam.  It was really hard to comprehend how huge Kilauea (Volcano) is from our viewing area but the crater is a mile long, 3,000 feet across and the floor is 400 feet below the overlook. 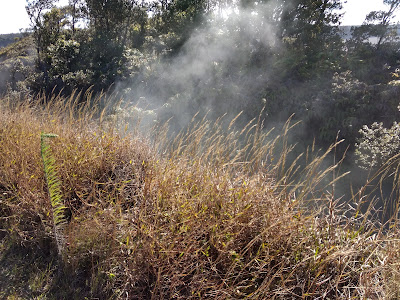 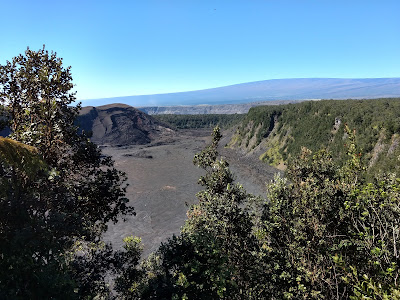 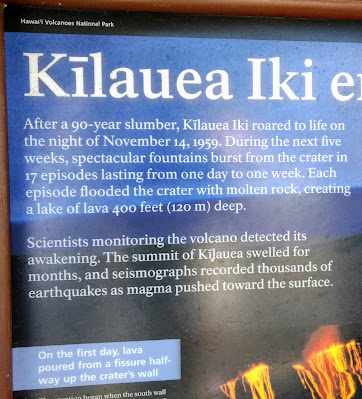 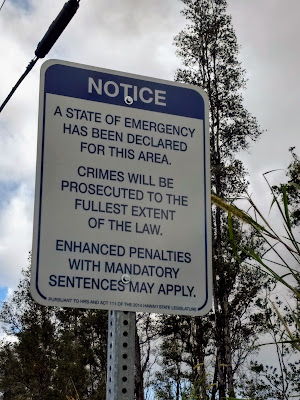 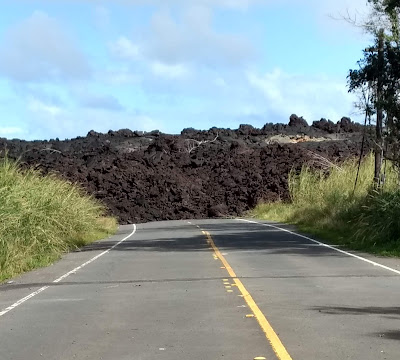 I have heard from a few of you that welcomed me back to my blog.  I really appreciate knowing that someone out there is reading my ramblings.  You make it worth it!  Feel free to leave a comment.  I actually heard from a good friend that said I should have ended the last blog post on a high note and gave me a couple of suggestions.  What I left out that was the big news for us in November that Ashley was one of only 16 chosen from the Army medical field to receive the 9A Designator recognition.   This designator is the highest recognition of professional excellence in the AMEDD.  It is an honor bestowed upon candidates approved by the Army Surgeon General for professional excellence, who have attained full professional status and have received national prominence in their field.  The candidates must be leaders in their specialty and have significant contributions to the advancement of knowledge in a particular field.  They must be a distinct asset to the AMEDD both as an officer as well as a professional specialist and they must have had at least 15 years of professional experience with at least 10 of those years being on active duty in the US Army.  Can I get a hip, hip, hooray!!

In other good news, Ashley applied for a position at the Uniformed Services University of the Health Sciences in Bethesda, MD and found out in early December that she got the job.  She had to interview while in VietNam on some phone app and was a bit nervous about how that would turn out.  She will be leaving Hawaii in June to start her new job as Associate Dean of Clinical Affairs.  So, this was probably our last trip to Hawaii although Ashley wants me to come back and help her get packed up in the spring - we'll see!  I am excited to have her closer to family!

We stayed in Hawaii for a month this time and sure enjoyed ourselves!  Here are a few pictures from our stay. 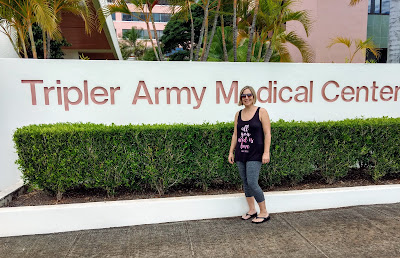 As promised, here are a few of my Hawaii pictures.  I still have about half of them to go through!! 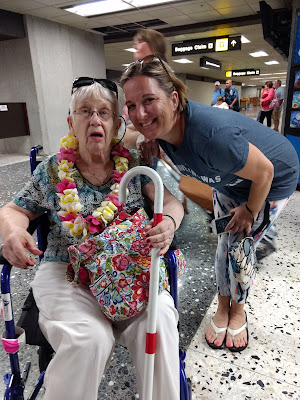 Ashley met us at the airport with lei's.  Mom loved it!  We had a little problem leaving the Charlotte airport though.  Mom doesn't have a drivers license, only a NC DOT ID card.  Well, it had expired - but we had not realized it.  Luckily, they let her through using the expired ID and her bank card!  Coming back home, the Hawaii Security didn't say a thing about it!  She was hoping she'd be stuck in Hawaii!! 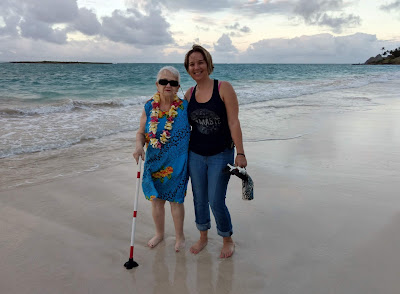 Her first walk on the beach.  The water was pretty cold - I never got in past my waist. 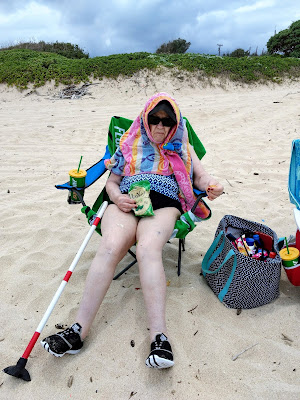 It was really windy and the wind was bothering her hearing aids so she clipped the beach towel around her ears! 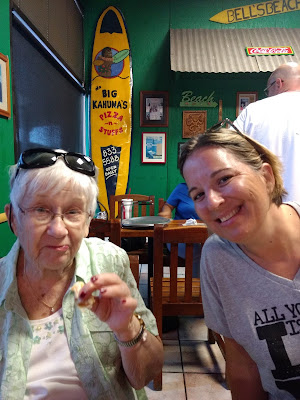 We had lots of good food in Hawaii!  This was our final night on the way to the airport - garlic knots and pizza! 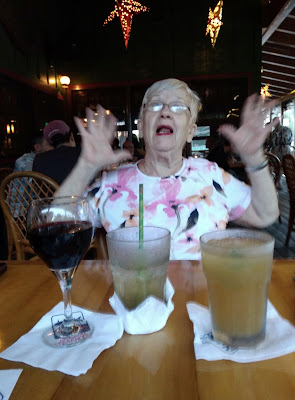 These mai tai's were pretty strong!! 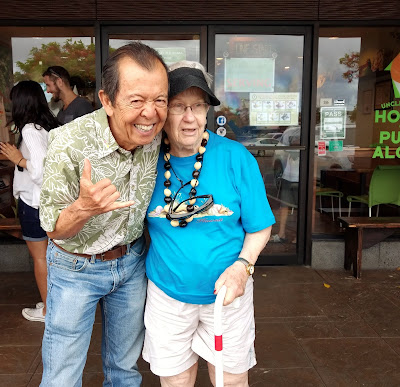 Mom had her first shaved ice at Uncle Clay's House of Pure Aloha.  This is her with Uncle Clay.  She told him to come to NC and open up a shop!!  He taught her to do the "shaka." 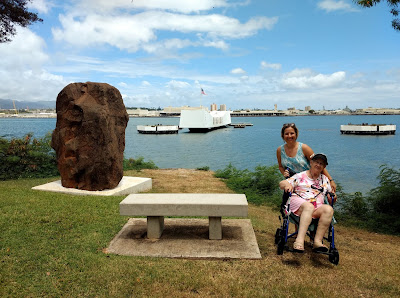 This was taken on Ford Island which is just across the bay from Pearl Harbor.  We went to Pearl Harbor first and watched the film before boarding a boat that took us around the memorial.  Unfortunately, we could not go on the USS Arizona memorial because of something being fixed on the ramp but we got a pretty good view anyway. 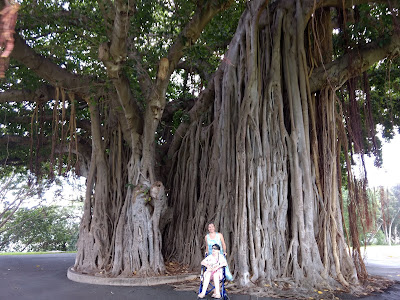 This is a banyan tree on Ford Island.  It is huge and I'm sure, several hundred years old!!! 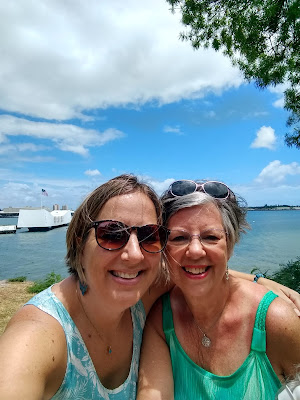 A selfie from Ford Island.  The USS Arizona Memorial is over Ashley's shoulder. 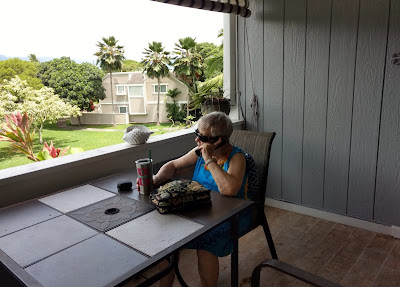 Mother spent most of her time in Hawaii sitting on Ashley's lanai!  She loved sitting out there - eating her meals, talking to her friends, playing with her IPad.  She wanted us to put a bed out there for her! 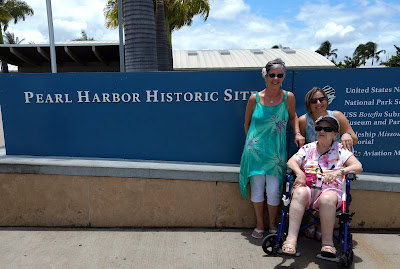 We didn't get many pictures of the 3 of us! 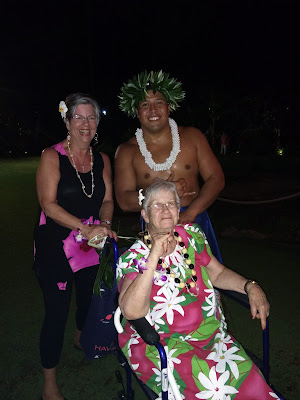 We went to a luau at the Hale Koa.  This was one of the fire dancers. 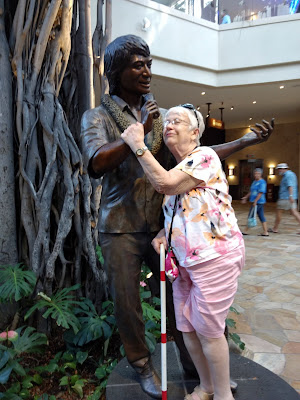 In Waikiki, there is an International Market with this statue of Don Ho. 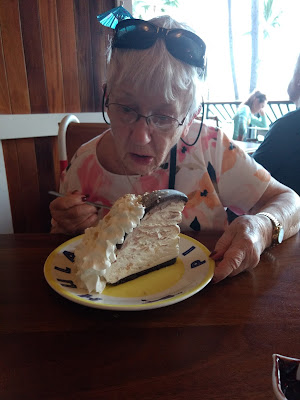 We had dinner one night at the Hula Grill in Waikiki.  This was our dessert - with a bowl of chocolate syrup on the side since Ashley does not like chocolate!! 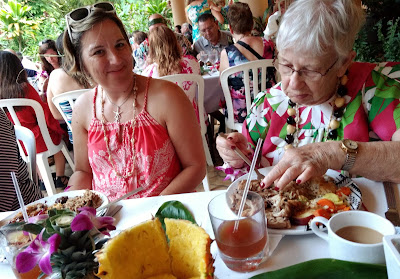 We did a lot of eating!  This was at the luau. 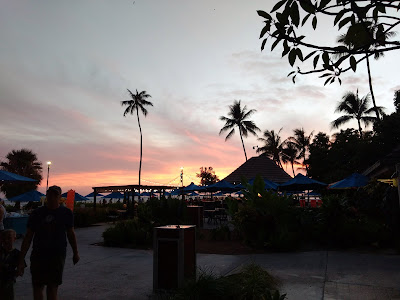 How do you like that flower at the top of my blog?  That was taken last year.  It is a huge tree in Ashley's back yard.  We call it the Q-tip tree!  It is just starting to bloom now and I am think the flowers will be fully opened before I leave next week!

Thought I'd share a few more pictures from our trip in no particular order. 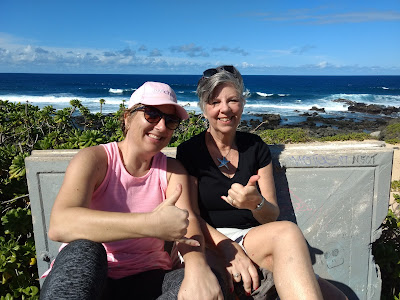 This was taken on our hike the first week we were here.  Ashley and I are giving the "shaka" sign.
The shaka sign, sometimes known as "hang loose", is a gesture often associated with Hawaii and surf culture. It consists of extending the thumb and smallest finger while holding the three middle fingers curled, and gesturing in salutation while presenting the front or back of the hand; the hand may be rotated back and forth for emphasis. 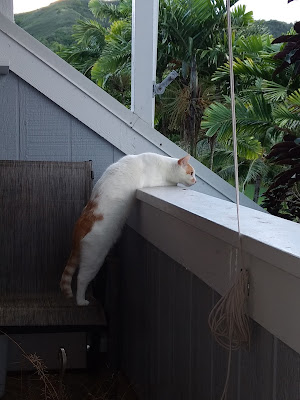 Ashley's cat, Bogart watching the birds!  He loves it when we go out on the lanai so he can go too!  He drives us crazy though walking along the ledge.  I am so afraid he is going to jump from there onto the roof and down.  Her lanai is on her second story. 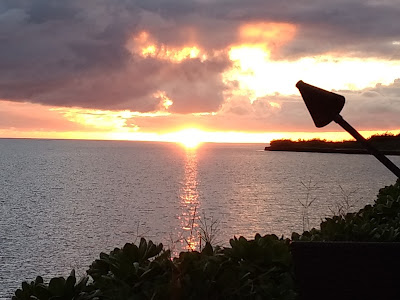 This was a beautiful sunset on New Year's Eve at Molokai.  That missile looking thing is actually a torch that wasn't lit yet.  This picture was taken from the pool, bar and restaurant area of our hotel. 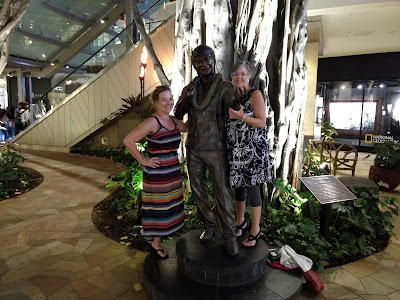 We had dinner at Waikiki Friday night after enjoying a great show.  This was taken at an open air mall that we walked through.  The statue is the late, great Don Ho.


Well, it has been a while since I wrote on my blog.  We are in Hawaii with only a week left.  I will be sad to leave .... especially since back home the temperature hasn't been out of the 20s I don't think while I am enjoying high 70s and low 80s!!  What an adjustment we'll have to make!

The Occasions AND Sale-A-Bration catalog are ready to go.  There are some great products in there - hope you have had a chance to look through the catalog.  I have placed my first order and hopefully, it will be waiting for me when I return home next week!  I can't wait to play with new goodies.  I had a hard time narrowing down my choices since, of course, I wanted it all!! 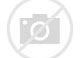 We have been busy ever since arriving here on the 24th.  We had a quiet Christmas, just the 3 of us eating, visiting and watching football.  We went on a hike one day during the week and saw some awesome views.  The hike was not steep but was long - think we figured it was over 4 miles round trip.  I was glad to see the end!  For New Year's, we flew to the island of Molokai where the leper colony is.  Our plane was definitely a puddle jumper - only held 9 passengers and we were asked our weight before we boarded!  There are only 8 past patients living at the leper colony now.  I don't know what will happen to the "town" once they are all gone.  The only way to get to the colony is by hiking or riding a mule.  We chose the mule!   The route down to the colony was rocky with puddles of water everywhere (Hawaii set a record a few days before with rainfall!).  It was a trail with 26 switchbacks.  It was a little bit scary!!