It's time for another Paper Craft Crew Challenge .... #10 already!  I made this cute Christmas card using My Mittens stamp set in MDS2.   I also used the new feature that was just released yesterday to rip the edges of the paper.  This is done using the Freeform Tool.  I gave the sides of the DSP ripped edges and matted the DSP with red.  This really enhanced the torn edges.  I love this feature and will be playing with it a lot more.

Make sure to check out the other cards made by the design crew HERE. 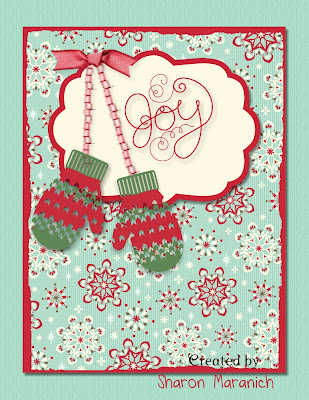 What do you think of my new blog design?  I won't tell you how many hours it took me!  Not because it was hard, but I just kept adding different layers and overlays and recoloring the DSP to get just the right color.  In the end, I love it!  I was so in love with my previous blog design that I was worried I wouldn't come up with anything quite as good.  But I'm patting myself on the back because I like this one too!

I won't be posting tomorrow.  I am going to Forest City and Rutherfordton after my Newcomer's Coffee to visit with two of my ECU girlfriends.  Jackie still lives in Rutherfordton and Brenda's family is there although she lives on Baden Lake (west of me I think).  Brenda is going through some health issues which is hard for me to believe.  Of the three of us, she has the healthiest lifestyle.  She runs, plays golf, eats naturally, takes all kinds of vitamin supplements, etc.  Jackie and I ..... not so much!!  So it will be good to visit and find out what all is going on with both of them.  We usually always visit over a glass bottle of wine or a pitcher of frozen strawberry daiquiries and reminiscence about our college antics!  We've known each other for 46 years!  Wow - hard to believe.
I love comments! Sharon at 10/02/2012 No comments: Links to this post

Oops - almost forgot the Sketch Challenge today!!  But I got "er done!! 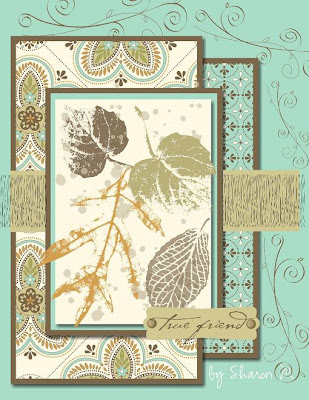 I used My Digital Studio to make this card BUT you don't have to do that.  Here are the supplies so you can make it yourself without MDS:


The sentiment and the "squiggly" swirls on the Pool Party cardstock came from a retired set, Simple Friendship.  But these could easily be replaced by any other sentiment and a set that has some swirls in it (maybe Baroque Motifs) or you could easily leave them off.   So even though I used MDS to make this card, it is easily reproducible (is that a word?) using your own supplies.
We had friends here for too short a time this week.  Margaret and Graham flew to NC Friday and were at their daughter's house in Charlotte until Monday when they came to visit us.  Unfortunately, as they were driving here, their daughter called and had been in a minor fender-bender so they only stayed long enough to have a cup of tea and turned around and went back to Charlotte.  But they returned on Tuesday morning and Margaret and I spent the day visiting and stamping while the guys went to the gun range.  This was the first visit we have had with them since last March!!  Hard to believe!  But it was nice for Margaret to be here for Stamp Club.  They left this morning.  We were hoping for a longer visit but they are planning to fly home to England to visit Margaret's parents Sunday so they had to head back to Texas to get ready.
I love comments! Sharon at 11/16/2011 No comments: Links to this post

Spring is officially HERE!!  The first day of spring is March 20.  We have had beautiful days recently.  I don't think I will find spring weather though in Ireland and England.  I have packed for the cold!  According to the AccuWeather site, it will be in the 40s and 50s next week in Ireland.  So, I guess I will be taking my boots instead of my flip flops!!
Last Friday when our friends were visiting, we went to Old Salem in Winston Salem and had a wonderful day.  The cherry trees were in bloom and were just spectacular!  Check out my blog heading - it was made with My Digital Studio and pictures I took of the blooming trees!  Here are a few more pictures from our visit.

The year's at the spring,
And day's at the morn;
Morning's at seven;
The hillside's dew-pearled;
The lark's on the wing;
The snail's on the thorn;
God's in His heaven -
All's right with the world!
(Pippa's Song by Robert Browning)
My posting will be sporadic the next few weeks.  I've scheduled a few postings in advance.  We are leaving March 21 and will return April 9!!
I love comments! Sharon at 3/20/2011 No comments: Links to this post

"It takes a long time to grow an old friend."   ~John Leonard


I had a wonderful day Monday with my girlfriends.  My two college friends come for a visit Monday.  It is so wonderful that we have kept in touch all these years.  We met in 1966 when Jackie and Brenda lived across the hall from me at Umstead Dorm at ECU.  They were such a livesaver to me since my roomies weren't the greatest.  They were both from the mountains and called me the rich city girl.  We were pretty inseparable and all three were education majors.  Those were the days!  We have come a long way from those silly college girls to now be silly senior citizens! 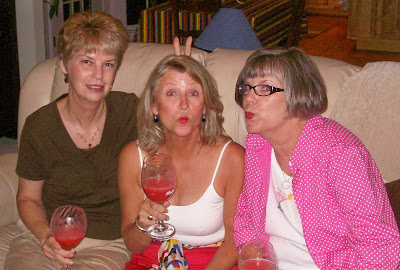 This is us at the end of the night drinking our usual strawberry daiquiris!  I used to make daiquiris for us in the dorm room - sitting on the floor with the blender and the contraband rum.  Of course, drinking was against the rules in the dorm but that didn't stop us.  So, everytime we get together one of us brings the rum and we have a drink or two.
We started out the day Monday with lunch which Brenda treated us to since she will be first one of the three of us to receive her Social Security check!  Her birthday is next week, mine in October, and Jackie in December.  Then we headed out to do some damage with our credit cards!  We shopped till we dropped and finished up with appetizers at P F Chang's.  We had to watch our time because Brenda had forgotten to bring the rum so we had to get to the ABC store before they closed!
It's funny - in college, everyone thought Jackie and I were sisters.   We really never saw the connection.  Jackie told us about one time when she was stopped in the hall of our dorm by a girl from Charlotte that I had gone to school with and who knew me.  The girl, Jane, asked Jackie if she was my sister.  Jackie replied, "no - are you Dracula's sister?"  That is so funny now and so unlike Jackie who was always pretty quiet and shy.  (Of course, around Brenda and I, we didn't give her much opportunity to get a word in edgewise.)  Well, last night I found an old picture taken our freshman year.  It was of the three of us pretending to be in a band.  Brenda was playing guitar with the broom, one of us was drumming a washpan and the other was singing in a pretend mike.  Would you believe Jackie and I had a hard time trying to figure out which one of the two was her and which one was me.  Brenda had to tell us.  I guess we really did look alike back then.  Jackie said she felt bad now being a smart-ass to Jane!!
Do you have a friend you haven't connected with in a long time?  Give her a call!  Girlfriends are the best!
I love comments! Sharon at 8/31/2010 No comments: Links to this post

Email ThisBlogThis!Share to TwitterShare to FacebookShare to Pinterest
Labels: friendship

This weekend started out pretty good.  Friday we went to Concord Mills and did some shopping for Jayce (grandson) who will be 3 in August!  He likes Thomas the Train so that is always fun for Sonny to pick them out.  Since we don’t get to see him much, we just have to imagine him playing with the trains.  After we returned home, things started going bad.  We received some disturbing news but weren’t so sure what it was all about.  Without going into a lot of details, it was a pretty big scare that turned out ok.  Everyone is fine but it sure makes you thankful for what you have.  And, it makes you realize that life can be taken away in a split second so you should be live each moment to the fullest!

I am trying to be a friend with a person in my life by taking baby steps towards a trusting relationship.

I've recently read an article about making friends out of rivals or enemies.  They listed these ten steps:

So, without further ado, here's the card that I made.

I used the new Soft Suede cardstock (new In Color) for the card base with some retiring DSP.  The stamp set is Boatloads of Love and I watercolored the image.  I used Liquid Applique on the clouds.  I also used the Nestabilities Labels One die.

Email ThisBlogThis!Share to TwitterShare to FacebookShare to Pinterest
Labels: Card Making, friendship, In Colors, Stampin' Up