A Birthday Shout Out and my swaps

First off I want to give a shout out to my friend, Margaret.  Today is her birthday.  I couldn't send her a card because they are en route from their home in Colorado back to Texas.  They have their mail forwarded to Colorado and I figured my card would get caught in the forwarding and who knows when she would receive it.  Anyway, HAPPY BIRTHDAY!
By the time you see this, I should be at the Quarterly meeting in Greensboro.  So I can go ahead and show you a couple of the swaps I am taking.

The first one is the general Holiday swap card.  I can't believe how long it took me to put this card together!  I don't usually pick a swap card with so many bits and pieces.  What was I thinking!  But the effort was worth it I think.  My snowman turned out so cute! 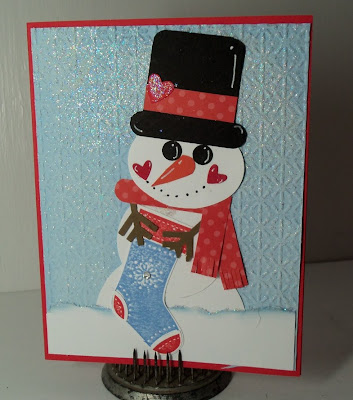 I punched all the pieces out for the snowman and put him together while watching TV.  But when I started assembling the card, he was too tall!  So I had to make some adjustments - cut his hat down a bit and cut his bottom a bit (wish I could do that with mine!)  The punches I used are:


Of course the stocking in his hand is stamped with the Stitched Stockings stamp from the mini and punched out with the Stocking Punch (so easy!!).  It is so easy to punch out the toe, heel, and top trim with the punch and stamp.  SU has grouped them together so it is just stamp and one punch to get all three .... easy, peasy!  I used a white gel pen to accent the hat, eyes and do the mouth.  The bottom snow is hand torn white cardstock, sponged with Bashful Blue and glittered.  The Bashful Blue background was run through the Big Shot with the new Snowflake embossing folder (mini catalog).  The DSP is from the In Color Stack - Poppy Parade.
We are also doing a technique 6x6 card swap.  I received a great card at Convention that used a new technique (to me anyway).  It is called Iced Crystals.  So that is what I did.  Can't wait to do a card with this technique.  I think it would look great for a Halloween card background.  What do you think? 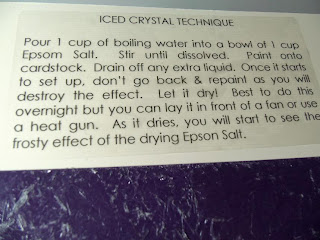 I have a couple more to share with you but I haven't snapped the pictures yet so I will try and share them tomorrow.

Have a great weekend!

I've had a pretty busy weekend.  Friday Marianne came over after work so we could work on our project for the NC demo Quarterly meeting next weekend in Greensboro.  I signed us up for all the swaps which is stressing Marianne out!!  We are doing 3D (9 total), holiday card swaps (16), 6x6 technique (8) and 30 shoebox cards!  The hardest thing for both of us is deciding on what to do!  We both had decided on our 3D project so we set to work finishing them.  We took a break at dinner to go to the Boathouse for some catfish (well, I had BBQ).  When we returned home around 8:30, the electricity was out.  The sky had looked really bad earlier.  I half expected a funnel to drop down although I didn't mention that to Marianne!  But we really never had a storm - it just looked really bad and their was some wind so we didn't know why the power was out.  I set about finding flashlights and candles.  We worked for a while by flashlight but by 10:30, we gave up and called it a night.  The power didn't come back on until midnight!  We found out the next day that a tree had fallen on the lines.  So we got up Saturday morning, it was straight to work!  We worked hard until about 4:30 - didn't even get dressed all day!!  Sonny and I were going to a friend's home for dinner at 7 so I had to get ready.
Here are a couple of the cards I made that didn't make the cut but that I love anyway! 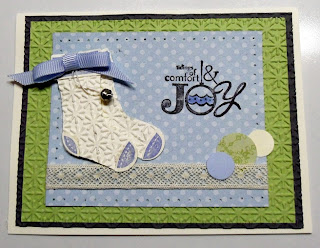 I love this card but I was afraid I didn't have enough of the DSP to do 16 cards.  Supplies used are:

﻿ ﻿
This was just a fun card!  I CASE-d it from Michelle Laycock.  Supplies used:
Stamp:  Wicked Cool
Paper:  Real Red, Basic Black, Whisper White
Ink:  Lucky Limeade
Access:  Striped Embossing Folder, Big Shot, Black Ribbon, Square Punches, Glitter, Sponge
Sunday was spent watching football.  First off was the Panthers who got their first win of the season.  After that game was over, the station switched to the final minutes of the New England vs. Detroit game and I got to witness Detroit beat New England.  Thought they were going to have to give Brady and Belecheck a crying towel!!  The Sunday night game was Pittsburgh vs. Indianapolis .... a game I thought would be a walk in the park with Peyton Manning out.  I was wrong!!  Pittsburgh ended up winning it in the final seconds but they sure didn't deserve it.  They played like crap!!
I love comments! Sharon at 9/26/2011 No comments: Links to this post 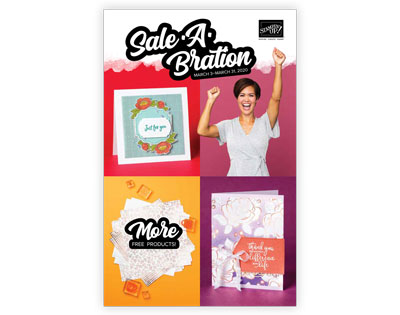