I have made the cutest holiday purse with a set of cards and note paper to go inside.  Yes, all paper!  I love Becky Roberts' work on Inking Idaho.  She did a 12 Days of Christmas (like just about everyone else!) and when I saw the purse she did, I knew I had to purchase her tutorial.  They were such fun to make!! 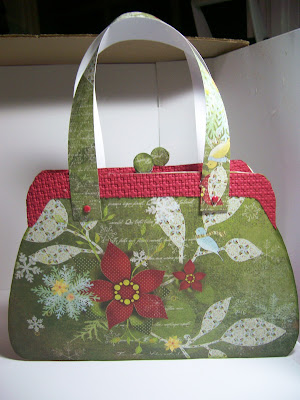 I was finally able to talk to Ashley today.  Her internet has been down since Sunday.  She went out yesterday with a group to check out the medical facilities at a base a couple of hours from her.  I don't know all the specifics of why she went or who she went with as I came in the room on the tale end of the story as she was telling her Dad (probably didn't want me to know!).  Anyway, they went out in a type of Humvee vehicle and she was sitting in the back seat just taking in the scenery.  She said the guys up front had headphones to communicate with each other.  The colonel asked her if she'd like to put his headphone on to hear what was going on and she told him no, she was just enjoying the scenery.  When they reached the base, the people there told them they were glad they arrived safe and had listened to their directions.  Evidently, while Ashley was "checking out the scenery", an IED (explosive device) had been thrown at the humvee in front of them but it was faulty and didn't explode.  The colonel told her he figured if she didn't want the headphone, there was no reason to tell her about what was happening!  She said it worked out ok for her - she  didn't have to get stressed out!  Really brings it home that this is a WAR she is in and not just a vacation.  All I know is, it's going to be a long year!
Ashley is very thankful for the cards you have been sending to her!
I love comments! Sharon at 10/28/2010 No comments: Links to this post