I made an anniversary card last week for my son and his wife.  They celebrated 8 years last week.  It's hard to believe!  Just doesn't seem like it has been that long.  Darcie wrote a sweet post on her blog on their anniversary.  Jeff travels a bit for his job and was in Atlanta on their anniversary.  When he returned home, she was headed to California for a writer's conference so their anniversary celebration was going to have to wait.  Perhaps until this week when they are flying to Florida and going on a Disney cruise.  Of course, Jayce will be with them but I think those Disney ships have built in babysitters so they should be able to steal a bit of together time.  Hope so!

I used the Perfectly Preserved set to make their card.  I thought it was cute to put the hearts in the jar.  Hope you can see the card well enough - not the best photography on this one.  I used some of the retired Spice Cake DSP that I had. 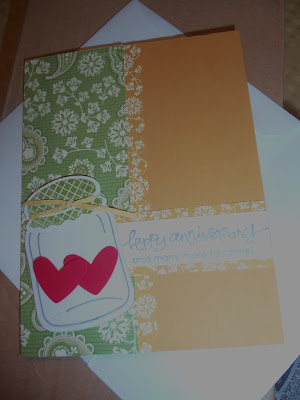 I've really been on a roll the past few days with making cards!  I've been working on Christmas cards!  Whoo Hoo!!  I'll be sharing them with you in the next few days.

Have you been watching any of the new tv shows this week?  We tried out Vegas tonight and have watched The Mob Doctor also.  I'm excited to see Nashville but it doesn't start until Oct 10.  Also one of my favorites, The Amazing Race starts this Sunday.  I think it is one of the best reality shows out there, although I also love The Voice.  I just love Adam Levine (Maroon 5) and Blake Shelton.  Their bantering back and forth is so funny.  We watch entirely too much tv but hey .... that's what we do!
I love comments! Sharon at 9/27/2012 No comments: Links to this post

This is a picture of Ashley and the Hug Lady of Killeen before she left for Iraq! 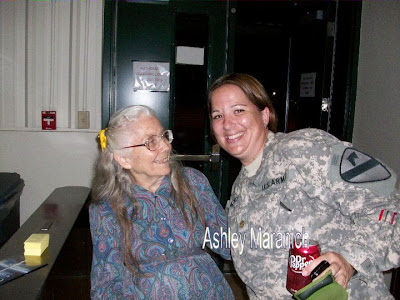 Today I finished up a lot of odds and ends of projects and made a couple of new things while I was at it.  All while I was watching some of the new shows that debuted this week.  When I got the Sept. 17 issue of Entertainment Weekly magazine, they had a run-down of all the new fall shows.  There were a lot that sounded pretty good to me (for a change!)  So our DVR has been doing double-time.  We have a DVR downstairs that records shows Sonny & I watch together ... and some he watches without me and I have a DVR in my craft room that I record all my shows.  So far, here are my takes on the ones I have watched:
So that's all I've watched so far.  I know I spend entirely too much time watching tv!  I've been pretty lost this week though during the day.  I've watched As The World Turns (soap opera) for more years than I care to admit and it has been canceled.  The last show was last Friday but I didn't watch it until Tuesday.  I just couldn't bear it.  Now I don't watch any soaps.  First they canceled Guiding Light and then As the World Turns .... what's a girl to do?

Here's a cute little Grandma's Brag Book I made today.  It is accordian folded and goes into a little plastic box.  I got the kit this summer at CKC. 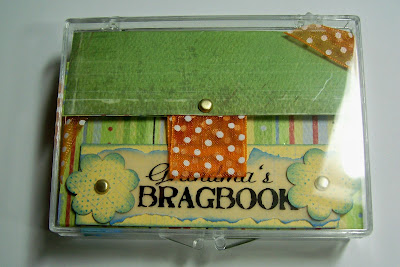 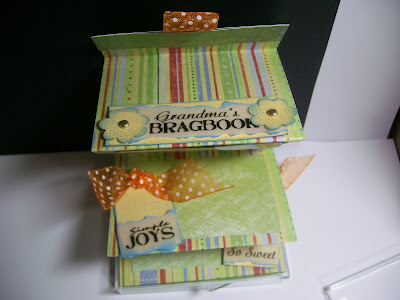 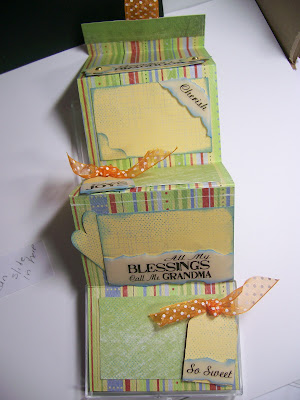