Have you ever started out with a good idea only to have it go in the complete opposite direction?  That is the story for this card. 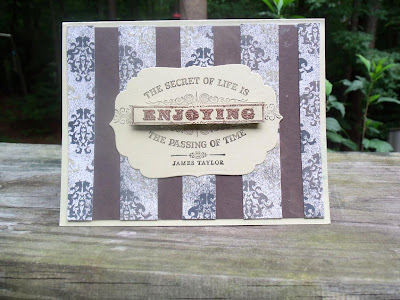 I started out creating a transparency card.  There is a bit of the transparency (acetate sheet) on the card but I ended up cutting most of it off because it just wasn't working for me.  The Espresso cardstock is behind the transparency and the DSP (retired) in on top of the transparency.  Oh well .... I tried to do something a little different.  It is a great man's card - I have trouble with those anyway.  The sentiment is from From My Heart and "enjoying" is embossed with Copper embossing powder and popped up.


I think my mom had a great birthday yesterday.  I didn't see her - I had a dentist appointment (ugh) and she wasn't home much anyway.  Angela took her to her swim exercise class in the morning and then to lunch with one of her friends from swim class.  They went to a pizza place downtown that Mom used to go to a lot with her friend, Marie.  Marie died last year and Mom lost her lunch buddy so hasn't been back.  The owner made a big fuss over seeing Mom again and that made her day.  Afterwards, she and Angela went to have a mani-pedi and a massage.  She had about an hour at home before they hit the road again to dinner and a meeting with the Lion's Club.  I haven't talked to her today because I guess she may still be recovering!  I am so glad she is feeling better and is able to do a lot of what she used to do.  She still hurts some and takes the pain meds but not on a regular basis like before.  I really believe the Physical Therapy and getting out of her chair and moving has helped tremendously.
I love comments! Sharon at 7/26/2012 1 comment: Links to this post

Email ThisBlogThis!Share to TwitterShare to FacebookShare to Pinterest
Labels: Family, From my Heart, nestabilities, transparency

Who woulda thought it?

3-0! 3-0! 3-0! Who would have thought this is where the Steelers would be after three weeks of football?  Well believe it friends, because the Steelers stayed undefeated by knocking down the previously undefeated Bucs 38-13.   The Steelers were doing so well that the Bucs fans started leaving around halftime. By the fourth quarter, the Tampa Bay Stadium might as well have been Heinz Field as Steelers fans vastly outnumbered Bucs fans at this point.  The Steelers are only one of two teams that are 3-0.  The Ravens are the only team standing in our way of going undefeated without Big Ben. They are 2-1 after coming off a close victory today against the Browns.  This means that if we want to keep the lead in the division, we must beat the Ravens next week in Pittsburgh. After that, it's the bye week when Ben is finally allowed to come back.
During the game, I actually got a message on my cell from Ashley!  She was listening to the game through her computer!  Modern technology - gotta love it!
I had some time yesterday to make a few things.  My brother-in-law flew in yesterday from Texas.  We were supposed to pick him up at the airport at 5:30 but his plane was delayed and it ended up being 7:15 before he got in.  So, that gave me the whole day to be creative!
I followed a tutorial on Splitcoast to make this card: 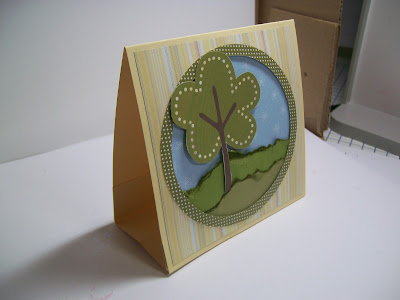 I cut the circle our with my Nestabilities and also cut the green polka dot frame out with the Nesties.  The tree is cut from the retired Sweet Pea DSP.  I tore the grass from Old Olive cardstock and a piece of green from the DSP.  The blue DSP is some really old SU paper that I found in my scraps.  The directions called for the blue paper to actually be on the inside back of the card but I needed to cover up my tape so changed it up a little.  The piece on the bottom is accordian folded so the card can stand up.

I also made these cute luggage tags.  I picked up these little tags somewhere - I think CKC and used some vellum tags on them.  I love making these flowers! 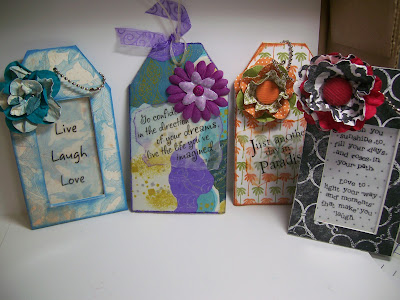 I'm "batching" it for a couple of days.  Sonny and Jack (brother in law) left today after the game to do some fishing down at Cooper Santee (SC).  Hopefully, they'll come home with a bunch of fish!
I love comments! Sharon at 9/26/2010 No comments: Links to this post