How do like the new blog background and banner?  I had such fun designing it.  I'm taking an on-line class and learning so much!  I just love that I can recolor the DSP and embellishments now.  It makes matching everything so easy.

It was a beautiful weekend here in the Carolinas ... hard to believe it's August.  Sonny and I got some fried chicken and fixins' from the grocery store, gassed up the boat and went out on the lake in the late afternoon after I got home from playing cards.  We threw the anchor over near Queen's Landing and settled in to listen to the band that was playing, Too Much Sylvia.  They were really good and I would love to go hear them again some time.   I would highly recommend them if they ever play in your area.  We didn't cover the boat at night and went out again on Saturday for a few hours before it got too hot.  And I still had time to play on Saturday afternoon.  I saw this cute snowman card on Pininterest and just had to give him a try.  Isn't he so cute?   The card base is white and I just freehanded the black and red cardstock on the top and bottom.  I used the Star Punch for the nose (sponged with Cajun Craze).  I used my white gel pen for the accents on his hat.  The felt holly is retired from Stampin' Up. 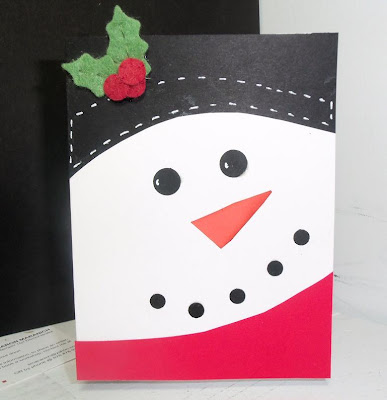 Another project I worked on this weekend was making Sour Cream Containers.  These have been around forever but I have never made any.  I volunteered to make the name tags for our Southern Living Bingo Dinner.  We auctioned the dinner away at our Bingo Night in June and got $300.  So, our group is preparing and serving a dinner for 10 people next Thursday. Sonny and I will be on our way to Texas on Thursday so this is my contribution.  I decided these Sour Cream Containers would make great name tags.  I bought some dinner mints at the Dollar Store to fill them. 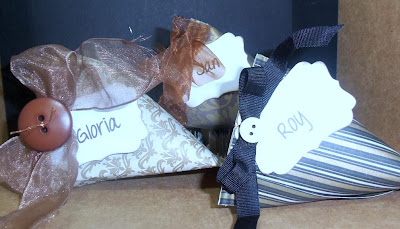 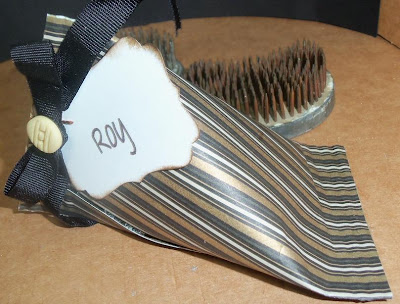