When Ashley was here in November, she had fun playing with my stamps.  She is such a good little artist and doesn't have to CASE like I do!  Here are a few of the cards she made using You're Sublime.

This card is done in Elegant Eggplant and Daffodil Delight.  She stamped the Paisley and Posies (still available) stamp on the background.  The Daffodil piece was cut out using the Sunburst Thinlit.  She stamped the camper onto white cardstock and stamped the polka dots all over it with Perpetual Birthday Calendar. 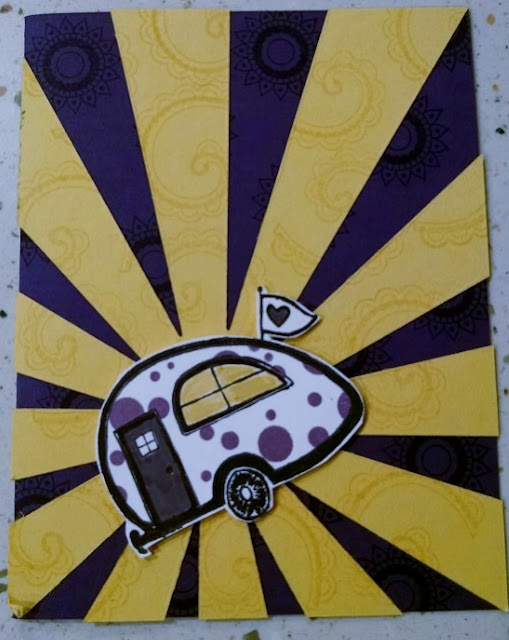 This card uses the cute little crab from You're Sublime.  The embossing folder is a retired one but you could easily substitute the new Seaside folder. 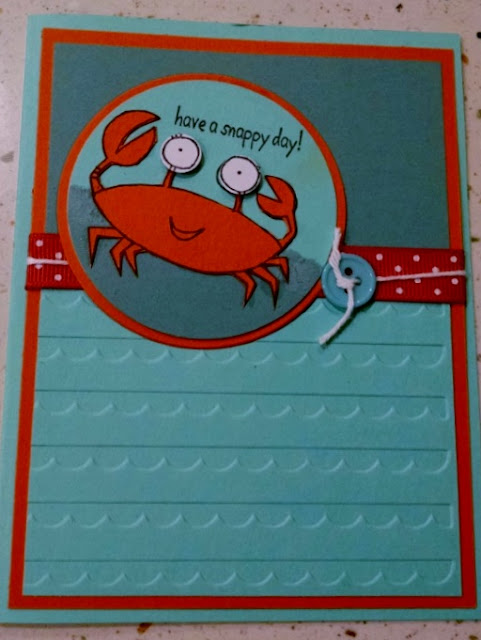 I'm sure you will see the Beatle connection in this next card!  She is a HUGE Beatles fan and just doesn't understand why I didn't go see the Beatles in concert when I was a teenager.  The closest they came to Charlotte back then was Atlanta.  We didn't just get in the car and drive that far back then nor was concert going a regular thing for a teenager!  She hand wrote "We all live in a ...." 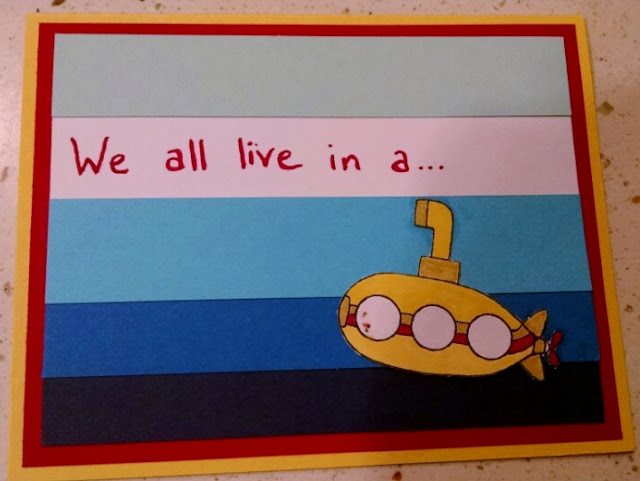 Aren't sunflowers beautiful?  I made this sunflower using the Starburst Thinlit.  I can't believe how many different things you can do with that thinlit.  Don't know why it took me so long to purchase it! 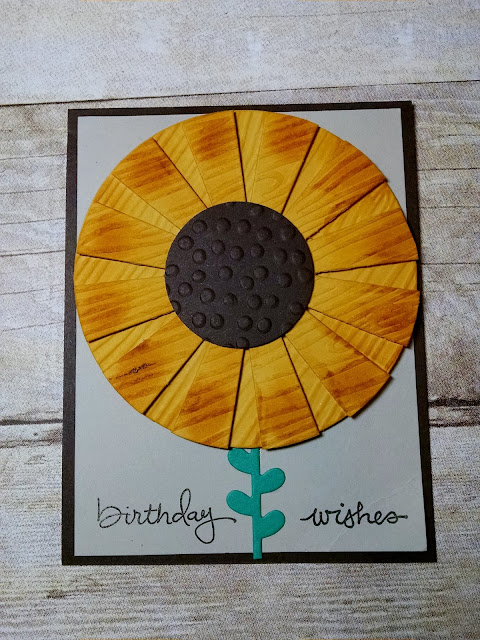 I die cut the starburst and then used a circle die to trim off the longer edges.  I also die cut a circle for underneath the "sun."  Then I ran them both through the Woodland embossing folder.  The center piece is cut out with a circle die and embossed with dots.  A simple and fun card.

I lived up to my blog name yesterday and got some really inky fingers!  I mistakenly put my fingers on the Dapper Denim ink pad yesterday and this is the result: 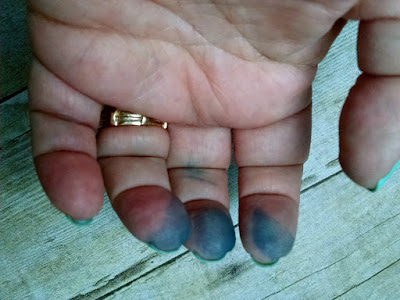 Look what I got in my last Stampin' Up box!! 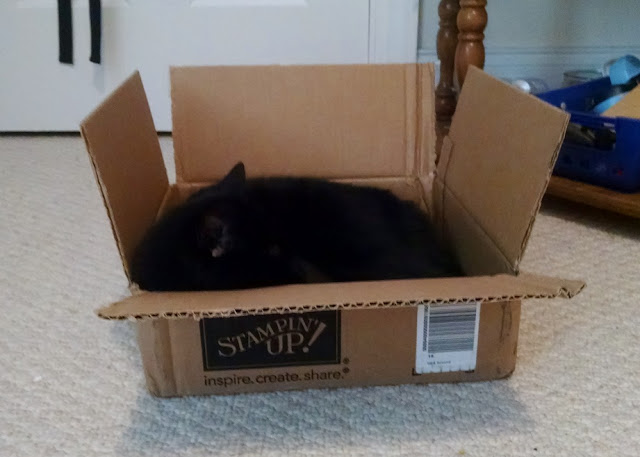 Sammie has been my constant companion the last few days I have been working in my stamp room!  She crawls into that box and curls up and sleeps the day away!  At night she is downstairs with us and gets in her "Bo Box."  For those who don't know, that is a box from Bojangles that my sister & mom brought to her! 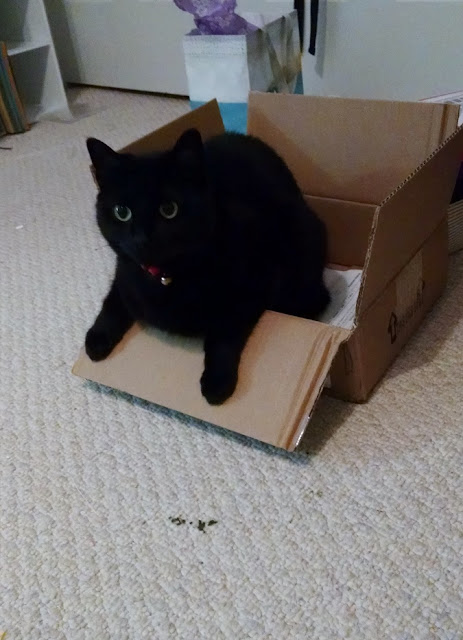 I really like the Starburst Framelit.  I don't know what took me so long to order it but when I started seeing some cards others had made with it, I bought it.  So glad it carried over to the new annual catalog!

In this first card, I die cut the starburst in Real Red and put it on a black card base.  The DSP and ribbon sticking out of the sentiment circle are all retired and some I found in my (huge) stash of retired items!!  The sentiment is a new stamp set, Layering Love.  When I shared this with my Stamp Club gals, a couple of them commented that this card would look great in red, white and blue.  Hmmmm - maybe another idea to share!!  Stay tuned! 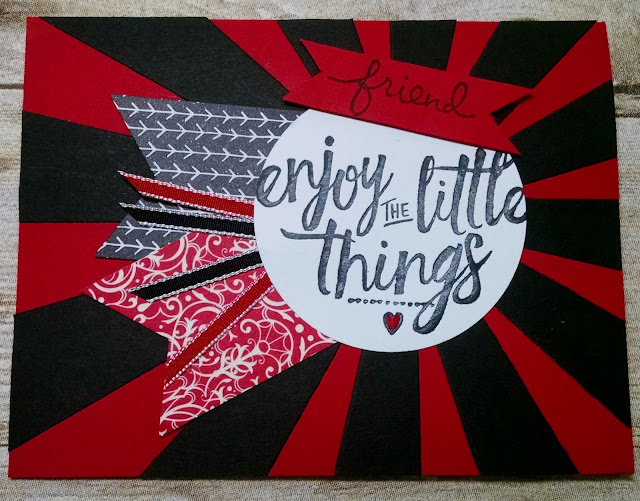 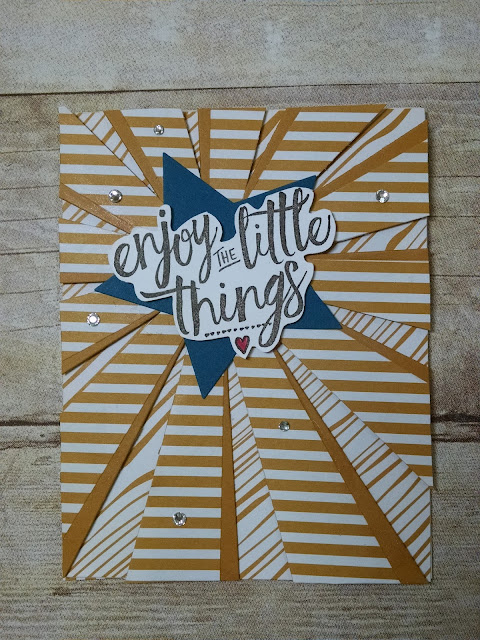 This card is pretty much like the red and black card above.   I just added a little bling.  Don't you love that saying "Bless Your Heart"?   You can find it in the Jar of Love stamp set.  We had a discussion yesterday at Stamp Club about Southerners using that sentiment.  I am a Southerner but that is not something I say a lot.  One of the gals (who is from the north) said she had heard that was the Southern way to say "F U" .... what????  I don't believe that!  I tried to set them straight but since I was the only Southerner in the group, not sure if they bought it!  What do you think????  Comment below please! 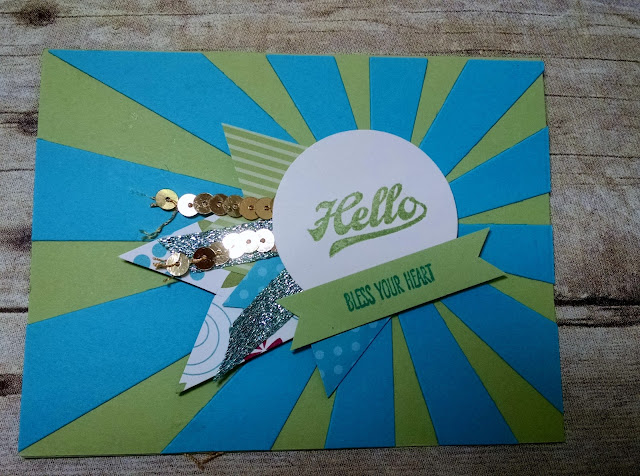