Whoo Hoo!  The Ravens won the Super Bowl tonight.  I was pulling for them rather selfishly.  I didn't want San Francisco 49ers to win because they would have had as many Super Bowl Rings as the Steelers did.  It was a really good game and at the end, I was on pins and needles pulling the Ravens through.  In the last 20 seconds, the Ravens scored a safety which I didn't like.  See, I was playing in one of those football squares games and I had the winning score UNTIL they scored that safety.  I would have won $250!!!  Grrrrrr .... I was P.O'd!  But Sonny and I did win the football pool we have been playing all year.  Sonny came in first and I came in tied with 2nd place.  We had to guess what the total points were going to be at the end of the game and I came closer than the gal I was tied with so I got second and she got third.  I think I get $40 but beggers won't be choosy!  Sonny gets $200 for first place!!  Quite a difference in pay out for 1st and 2nd, huh?  At least we are keeping it in the family.

I spent today working on a couple of projects.  I am going to NC Demos Quarterly in March and am participating in a 3D Swap.  So, I tried out a couple of things today.  I just love this Get Well Box that I made but I think it is too involved for a swap.  It will depend on the number I would have to make.  We'll see.  Right now, I'm just auditioning projects! 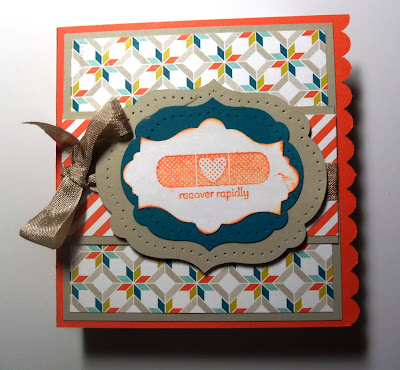 I found the tutorial for this cute box here -  http://kingsonpaddington.blogspot.com.au/2012/09/get-well-kit.html

Here is the inside: 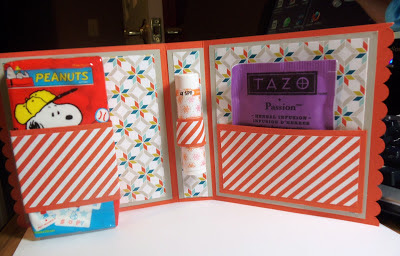 There is supposed to be a throat lozenge holder next to the kleenex holder but I didn't have any to measure so I could make the holder for it.  I will have to buy some and add them later.  This might be something cute to make in Stamp Club.  I'll keep that in mind.